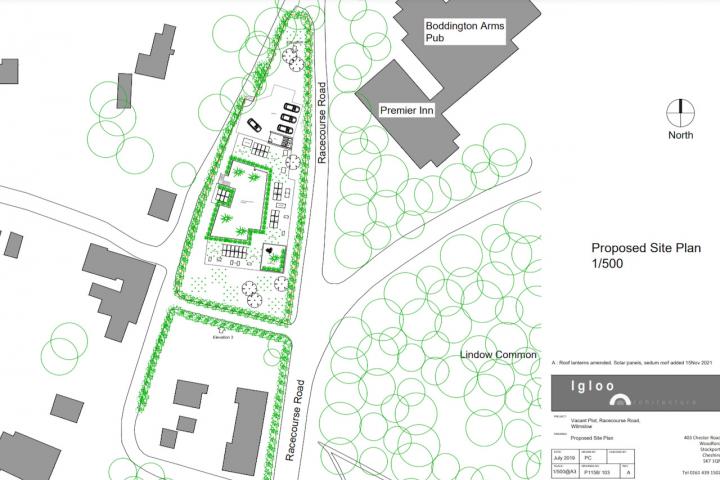 Plans to build an underground house on land off Greaves Road in Wilmslow have been refused.

Cheshire East Council rejected the proposal on the grounds that it was inappropriate development in the Green Belt, in a locations which is currently free from development and no very special circumstances have been demonstrated that would outweigh the harm to the Green Belt.

Wilmslow Town Council's Planning Committee recommend refusal of this application on the following grounds: inappropriate development in the Greenbelt without any special or exceptional circumstances and no specific need for a development of this scale; being out of keeping with adjacent properties; the provision of parking for 5 vehicles being detrimental to the openness of the Greenbelt; concerns with regard to road safety issues; concerns over the potential impact on nearby properties caused by the disturbance of the ground during construction and this application, which requires significant excavation, represents inappropriate management which has far reaching landscape impacts with the drawdown of the water table causing peat shrinkage, ground instability, oxidation of peat and a consequential release of fossil carbon into the atmosphere as Carbon Dioxide.

The plans can be viewed on the Cheshire East Council Planning portal by searching for reference 20/0622M.

John Westbury
But it was fine for a some Cheshire countryside to be destroyed for large housing estate to be built on former green belt land at Little Stanneylands.

Simon Atkins
Yes John, the double standards amaze me, however at least CEC have done the right thing for once.

Marcia McGrail
Well, of course conveniently ex-green belt Stanneylands would be given the go-ahead in preference to this hillock as a large housing estate would likely generate a lot more kickback, me thinks.

Mark Goldsmith
There seems some confusion about why Little Stanneylands was approved but this application was refused. So let me try and explain.

The government tells Cheshire East the number of houses it MUST allow to be built over the next decade. Like many councils, we don't have enough brownfield sites to reach this number, so greenbelt sites must also be included. What fields are chosen and how many houses will be allowed on them are all considered and decided in the Local Plan. Every council has a Local Plan and they are all based on the number of houses the government wants built in that area.

Cheshire East's Local Plan is robust and proves we will achieve our housing target over the next 5 years. However, if we refuse to comply or cannot prove this 5 year supply, then the developers get to build where they want to make up the target number.

So, because the Little Stanneylands site was allowed, this new application can be refused. Ultimately, Cheshire East can resist greenbelt development but the government will not allow us to refuse it all. We therefore have to sacrifice fields in the Local Plan to save the remaining greenbelt. I don't like this and neither do you but local opinion everywhere is ignored by Whitehall to ensure new houses get built.

Another myth is that these new houses generate extra revenue for the council. They don't. New houses means new families that need extra services. But the business rates that help fund these services doesn't also increase. So new houses do not add to the per capita funding pot, they reduce it. This makes the task of maintaining our public services even harder.

Therefore, people don't need to invent conspiracies about why councils allow these large housing developments to be built. The real reason is because we have no choice.