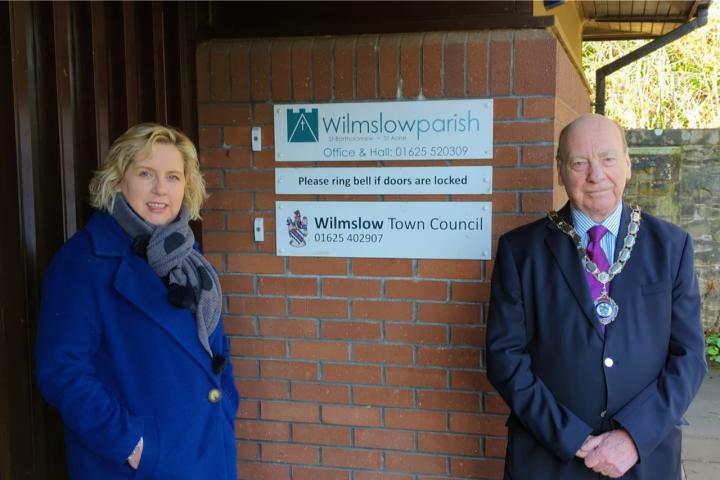 Members of Wilmslow Town Council have co-opted a former councillor as a new member to represent the Wilmslow West ward.

Angela McPake previously served on Wilmslow Town Council for four years having been elected as the Conservative candidate in 2015. She was vice-chair from 2017 until 2019 - when she was one of three Conservatives to lose their seats in the May local elections.

During this time, Angela's work included leading the Council's campaign to reopen the Rex, liaising with the landlord, agent, the Rex Revival group and the new tenant. Angela also chaired the committee that delivered the new toilet block in the Carrs as well as being part of the Council's events working team, who co-ordinated Cinema on the Carrs and the Christmas lights switch-on.

Angela said, "I am pleased to be back on the Town Council and thank the Councillors for their support. Having lived in Wilmslow most of my life, I am passionate about making a difference to the town, and hopefully the residents who live here.

"There is no doubt that the Rex reopening has made a significant difference to Wilmslow Town centre, and I am keen to see us continue to rise to the challenges of the changing High Street, improve some of the spaces around the town and deliver some of the commitments made in the Neighbourhood Plan (particularly in relation to the digital town centre, open spaces and public spaces). I am hopeful I can put my previous experience to good use on the Town Council again."

Wilmslow Town Council Chairman, Martin Watkins said, "We are delighted that Angela McPake is returning to the Town Council. Angela's previous projects on the Council – particularly with the kiosk letting for the toilet block at the Carrs and the very successful Rex cinema campaign -demonstrated her commitment to supporting residents whilst working to enhance the town. We look forward to Angela continuing her work on the Council."

Stuart Redgard
Congratulations Angela. Glad to have you back on the council.

Barry Buxton
I assume co-opted means unelected. Another own goal for this unnecessary body brought into being by a small minority of the Wilmslow electorate.

Martin Anderson
by what authority and whose mandate?

Jason Lyons
Here we go again, last year we had increases for CP with the same promises, however these promises haven’t come to fruition? Burglaries are on the up? I have no problem with an additional £1.04 per month, however I’m certainly not seeing value for money with previous increases?
I feel Handforth most definitely is the poor relative for policing given current burglary rate!

An election would have been called if just 10 residents of the ward had made a request for one to be held. The fact is that 10 residents did not ask for an election so one was not held.

When this happens the law allows the councils to co-opt.

If you wanted an election then you could have gone out and collected the names of 10 residents and submitted them yourself.

And yes, the council was brought into being by a minority of the electorate. However, ALL OF THE ELECTORATE had the choice to vote and the majority chose not to. That's democracy in action.

By the authority of legislation made by parliament and the mandate of the residents of the ward (Ie their lack of action to ask for an election to be held).

Martin Anderson
Think of the money we could save if the entire town council was co-opted :-)

Martin Anderson
#Stuart Redgard In which news papers was public notice given?

Jonathan Follows
The vacancy was reported here (https://www.wilmslow.co.uk/news/article/21935/vacancy-for-town-councillor-in-wilmslow-west-ward) and there was a good discussion about the potential cost of the by-election versus benefit at the time there. Obviously this is not a formal public notice, and I do think that the council could have helped themselves by explaining the co-option a little better in their recent announcement.

Mark Goldsmith
There was an article on this site about the vacancy in October and it contained full details of how an election could be called.

As no election was called, the councillors have delegated powers to appoint someone onto the council instead. The Conservatives and Residents of Wilmslow each proposed their own candidate but the Lib Dem's did not.

As the Conservatives hold the majority of seats, their councillors selected Angela, so she was appointed. Previously Angela played a very active part in the councils work, so I welcome her back. She replaces Oliver Romain of the Lib Dems, who scarcely attended, contributed little and was days away from automatically losing his seat from his prolonged non-attendance.

Therefore, (in this instance), I think the town has been well served by the process. However, if voters are unhappy with her appointment, then they can choose their preferred councillors in May 2023, when Angela and all the other seats are up for re-election.

I am confident that you will be able to spin all the necessary Parliamentary plates as well as keeping the Local Gov ones in the air at the same time.