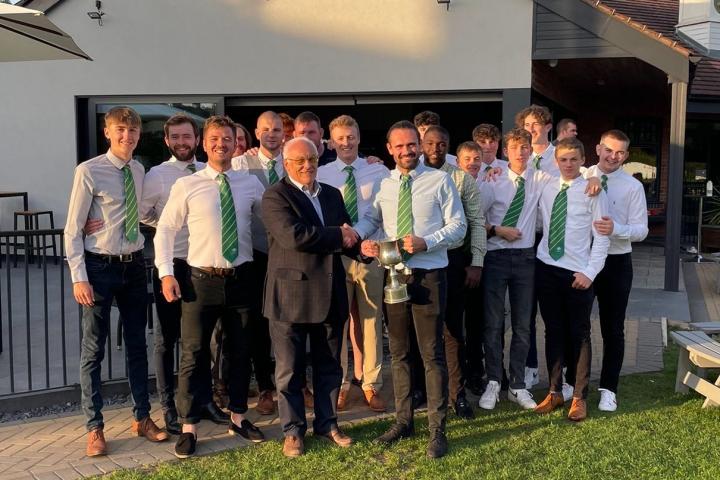 After a roller-coaster season, Lindow Cricket Club's Men's 1st XI secured their place in Cheshire County League Division One for the first time in the club's 141 year history.

With three defeats in their first five fixtures it looked doubtful that the season would end in such jubilant celebrations, but a lot of hard work and some exceptional team performances proved to be enough when the final league tables came out on Saturday evening.

In truth, promotion should have been secured a week earlier when Hale Barns were dismissed for just 73. Victory in that game would have been enough, but Lindow could only stumble to 69 all out and as a result dropped to second place in the table. So on it went to the final day of the season where Lindow needed victory at home to Barrow to ensure promotion.

Once again the Lindow bowlers led the way, bowling out Barrow for 66 with opening bowlers Ryan O'Brien (3-27) and club captain Alex Matthews (2-20) capping off an excellent season. The other five wickets came from an outstanding spell from Will Espley (5-14), one of a number of club juniors who have established themselves in the 1st XI this summer.

This time the Lindow batsmen made no mistake, taking just 35 balls to reach their target, sending the club's 1st XI to new heights. Rob Herriott (28*) ended the season as the 1st XI's top scorer with over 700 runs and Jadan Jones (33*) showed why he's been attracting the spectators all summer, scoring 32 of his 33 runs in boundaries. 'JJ' has been a hugely popular figure around the club having come over from Barbados for the summer and his 510 runs for the season saw 85% come from boundaries with 45 sixes and 41 fours!

The celebrations intensified with news that all four of the club's Saturday teams had won on the same day for the first time and then that league leaders Romiley had lost at Mobberley meaning that Lindow were promoted as Champions. It was a fitting end to the season as the League Chairman presented the team with the Division Two trophy in front of the club's newly redeveloped clubhouse.

With the Lindow u15 boys team winning the Cheshire Cup and the u17s reaching the final, along with the u11s, u13s and u15s reaching the South Manchester League's Finals Day, the club has an exciting future ahead. For now though, the club's players, volunteers and supporters will take some time to enjoy reflecting on a memorable summer!

Ian Tasker
Fabulous, friendly club which coaches cricket across all age groups. Excellent, modern social facility in the clubhouse too. Great to see them have such success with the 1st XI and junior teams.