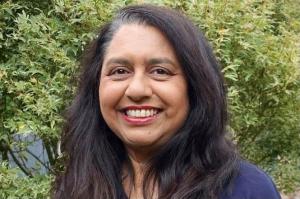 The ballot was triggered by Cheshire East Councillor Toni Fox (Residents of Wilmslow) standing down, due to her moving to another part of the country.

The by-election result was as follows:

Lata has lived in Wilmslow for 24 years and already sits on Wilmslow Town Council and on the Community & Order and the Finance Committees.

She helps organise Wilmslow's Festival of Nature with groups including Transition Wilmslow, Civic Trust, Cycle Wilmslow and many more. Additionally, she is involved with the Wilmslow Community Market Garden and a member of the Wilmslow Civic Trust.

Lata told wilmslow.co.uk "I am delighted the residents of Dean Row ward chose me to represent them and would like to thank all those who voted for me and helped with my campaign.

"I have already had my first official meeting as Dean Row councillor, when I met the Police & Crime Commissioner and the head of Wilmslow police on Friday 3rd September. It was a great opportunity to inform them of all the issues and concerns I have discussed with Dean Row residents over the past few weeks. They told me of some of the actions they are taking to address these problems (eg greatly increasing their number of motorbike officers) and will look into the other concerns we also discussed.

"My next actions are to improve the play area on Alverston Drive and to put the finishing touches to the recent Browns Lane park upgrades. I also want to see if there are funds to add some play equipment specifically for disabled children too.

She added "Additionally, I will also be looking at how we can make everyone aware of where they can get council help and information. For example, part of the Cheshire East website shows when your road gully was last emptied and when it is next due as they are now being routinely emptied every two years.

"My contact details will also be on the Cheshire Website in the next week or so and I want Dean Row residents to get in touch with me about any issues they have with the council. I am here to ensure they get access to any council services they need and to also make their wishes known when the council decides its policies and priorities.

"Therefore, I now have 20 months to show residents what I can do for them, before they have the chance to judge me again in the May 2023 elections."

David Smith
Good. Can we please have a RoW candidate at the next Lacey Green election to remove the encumbent?

Manuel Golding
Congratulations toCouncillor Lata and to the RoW team who have worked so enthusiastically and diligently throughout this election campaign. The whole team is a Wilmslow squad, we don't see the need to bring in outside-town help, as our opposition did - the team was well briefed before knocking on doors,therefore was able to counter the deliberate misrepresentation by the Conservatives of RoW within the Independent group on CEC. It was also a delight to see so many RoW election boards in the ward and a big thankyou to all householders who stood with RoW to lend their open support for RoW and Wilmslow. As one of the founders of RoW I'm mpre than delighted by our latest electoral win. The people of Wilmslow can no longer be ignored/passed over by the main parties.

RoW really does put "People Before Party", our latest election win proves the point.
David Smith asks a valid question and if he wishes to contact me I will be delighted to offer him answers, By the way David, RoW fought and won the recent WTC Lacey Green by-election that saw Councillor Simon Bulloch join the RoW team of councillors on WTC;Simon and our other councillors are available to hear all residents concerns about the services offered by our two councils.

Terry Roeves
Congratulations to Lata, who will, I’m sure, continue putting the best interests of Wilmslow and her Constituents, before out of date main party policies, like the other candidates, who cannot accept formally that the ‘old norm’ is not the ‘new norm’.
Well done Lata!

Marcia McGrail
What a lovely result for the residents of Wilmslow - well done to all concerned with this outstanding nomination.

David Smith
Manuel Golding:
Thanks for the offer to make contact.
By what means do you suggest I do this?
I contacted you by letter several months ago and giving YOU my contact details - but not heard anything in return.