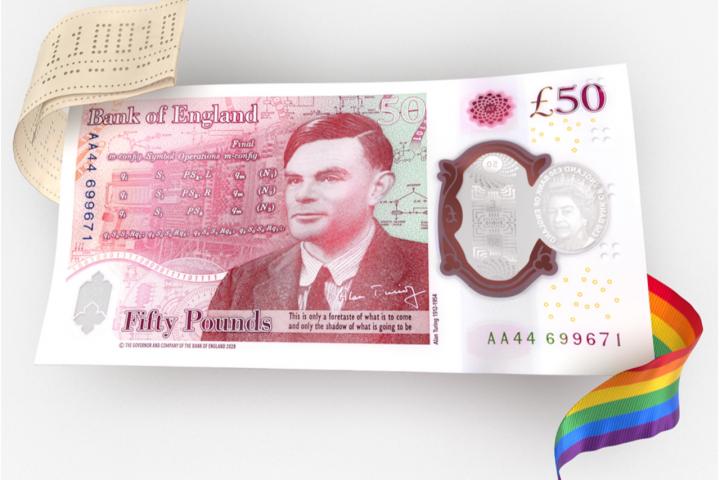 On the 23rd June the new £50 polymer note featuring the image of Alan Mathison Turing OBE, FRS will be released. The date marks the day he was born in 1912.

Widely accepted as one of the great innovative mathematicians and scientists of the 20th century, his genius embraced many fields. His
ideas led to early versions of modern computing, produced insights into what has become known as artificial intelligence and as one of the code breakers at Bletchley, his cryptology undoubtedly hastened the Allied Victory in World War II.

Turing moved to the University of Manchester in October 1948 as Deputy Director of the Computing Laboratory, where he helped develop the Manchester Computers. He also became interested in mathematical biology and morphogenesis - the theory of growth patterns and shapes in organisms.

Despite his many accomplishments, his contributions were never recognised in his home country during his lifetime as much of his seminal activities were covered by the Official Secrets Act.

In 1950 Turing bought a house at 43 Adlington Road, Wilmslow where he tragically died on 8th June 1954, aged 41, probably through suicide from cyanide poisoning. Councillor Jon Kelly organises popular historical guided walks around the town in September each year and when he asks groups who was the most notable resident of Wilmslow, the answer is almost universally given as Alan Turing.

It is felt that a permanent memorial to this brilliant visionary should be erected in Wilmslow. To this end Jon has formed a group of interested members of Wilmslow Civic Trust and Wilmslow Historical Society, to come up with an idea of how, where and when this could be achieved. Already the group has commissioned an original oil painting by local artist, Paul Webber, which it is hoped will hang in the Library. Smaller framed versions will be available for key locations in buildings around the town.

In September, Jon and his team hope to publish and disseminate through various channels a questionnaire seeking detailed views of the people of Wilmslow on what precisely they would support.

Elizabeth Kiddle
Interesting article, really pleased to hear that such a fascinating figure is still being remembered. We’ll keep an eye out for the questionnaire.

Vince Chadwick
Who are Melrose, Pendleton, Birrell, MacClean and Ainslie? Whoever they are or were our local bypass (Wilmslow and Alderley) bears their names.

Turing did amazing things in code breaking during WW2 at Bletchley Park, and went on to join the team at Manchester University that developed the world's first stored program electronic computer (therefore the first true computer as we know them) in 1948.

Why not rename Melrose / Pendleton / Birrell / MacClean / Ainslie Way (the entire length from Handforth Dean to Alderley park) to 'Alan Turing Way' after this great and so shabbily-treated man?

It is such a shame that Wilmslow is best remembered in the Turing story as the place he died and the unfortunate circumstances of this that don't sit well in modern and more enlightened times.

It would be great to start to reframe this connection slightly to celebrate his achievements while he was living in Wilmslow and on his ongoing legacy.

Victoria Pendleton, Niki Birrell, Craig MacLean and Ben Ainslee are all successful Olympians connected with the area and are worthy of recognition in their own right.

Melrose Way was named after someone who campaigned for the construction of the Alderley Edge Bypass.

We already have a Turing Drive and a Bletchley Park Way within a stone's throw of his former house so we've probably got the road angle covered. ;) There is also an Alan Turing Way in Manchester.

Christopher Dodson
Towards the end of his life Turing developed an interest in morphogenesis - the way that biological systems develop into complex structures with symmetry and repetition.In particular he spent time looking at the structures of flowers and developed a mathematical theory of morphogenesis that was used for many years after his death. I believe he wandered through meadows near his home on Adlington Road looking at wildflowers as he pondered this problem.
Would it therefore be an idea to try to commission a wildflower related sculpture & plant some sunflowers nearby, perhaps alongside the new path & cycleway from Wilmslow station to Alderley Park?