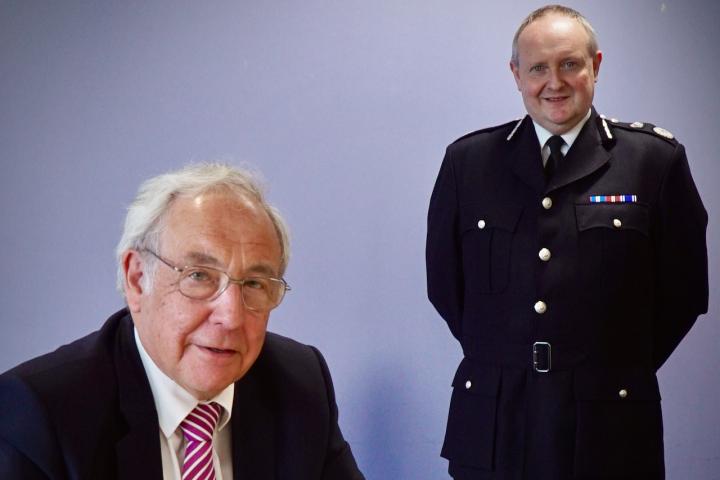 John Dwyer started in the role as Cheshire's Police and Crime Commissioner following his election victory on Thursday, 13th May.

He was declared as the county's Police and Crime Commissioner by Police Area Returning Officer (PARO) Halton Borough Council Chief Executive David Parr at the election count on Saturday, 8th May, following the elections on Thursday 6 May.

Mr Dwyer, who previously held the same post between 2012 and 2016, has taken on the role for the next three years. The term of office is normally four years but it has been reduced to three after the elections were postponed from May 2020 due to the coronavirus pandemic.

Prior to this, he retired as Assistant Chief Constable (ACC) in Cheshire after a 30 year career which started in Nottinghamshire, followed by a transfer to the West Midlands as a Chief Inspector and finally to Cheshire as ACC.

John's role is to be the voice of local people in policing and to hold the Chief Constable to account, setting the police budget and commissioning services for victims of crime and to prevent crime.

He said: "I am honoured that Cheshire residents have put their trust in me to be the next Police and Crime Commissioner and I'm excited to return to the role.

"Cheshire Constabulary is an excellent force with high performing officers, staff and volunteers who are committed to keeping our communities safe. I want to work with the Chief Constable over the next three years to support Cheshire to achieve 'outstanding' approval ratings from Her Majesty's Inspectorate of Constabularies and Fire and Rescue Service (HMICFRS).

"I'll hold the Chief Constable to account to reduce the amount of crime being committed and to increase the number of crimes detected. I'll also be asking him to develop strategies to address key issues in our communities including anti-social behaviour and rural crime.

"I know that police visibility is important to Cheshire residents and over the coming years I am committed to recruiting 240 more frontline police officers, taking our establishment to 2,320 by 2024.

"Ensuring the most vulnerable people in our society are protected is also a key priority and I will be working with victims of crime to understand their needs and I will commission services which support them.

"I will also be listening to our communities, businesses and partners to ensure their voices are reflected in the decisions I make on policing and crime. I am looking forward to getting out and meeting our communities in the coming weeks and months as Covid restrictions are lifted."

Chief Constable Mark Roberts added: "I am looking forward to working with John to keep the public of Cheshire even safer.

"Cheshire is a good force already and from working with John previously, I know we share the ambition to be outstanding."

Pete Taylor
An extra 240 front-line officers sounds very good, the cost of that might be as much as twelve million pounds; where will that come from? Will Westminster fund these 240 posts, or will the precept be raided again? I'm not sure how many times that trick can be repeated.

The Johnson "government" keeps trumpeting that they are going to create 20,000 new posts, although taking into account the 22,000 reduction, under the Cameron/Osborne administration, that is still 2,000 less than we had before.

As I didn't receive even an acknowledgement from the last PCC to two letters about the noisy car situation and the obstruction of pavements by large cars, I'll have to try again and see if we can hold this PCC to account, so to speak.

Stuart Redgard
Me thinks John Dwyer is being a little bit mischievous with the figures. If he is committed to recruiting 240 more frontline police officers, then by simple subtraction that means there are already 2080 frontline officers.

However, through a clever use of FOI, the Daily Telegraph established that the Home Office doesn’t actually define what frontline is:

I will be writing to John Dwyer to ask what his definition of frontline is and how he determined that it currently stands at 2080.

Let’s see if I get a response.

Stuart Redgard
Here's a copy of the email, and the automatic response I got from the PCC
--------
Dear Mr Dywer.

The purpose of this email is to gain clarification on a statement in the press release of 13th May 2021 on http://www.cheshire-pcc.gov.uk

It states that you are ……"committed to recruiting 240 more frontline police officers, taking our establishment to 2,320 by 2024.”

By simple subtraction that means that you believe Cheshire Constabulary already has 2080 frontline officers.

How and where is “frontline police officer” defined, and how have you determined that there are already 2080 frontline offices in Cheshire Constabulary at 13th May 2021?

Thank you for taking the time to contact the Police & Crime Commissioner for Cheshire. The Commissioner takes great pride in providing a voice for Cheshire residents and aims to respond to correspondence within 10 working days.

If you have not already done so, please can we ask that you provide your correspondence details.

Best wishes,
Office of the Police & Crime Commissioner for Cheshire

Pete Taylor
@ Stuart Redgard. Thank-you for taking the time to contact the Police and Crime Commisioner for Cheshire; I'm lead to believe that he takes great pride in providing a voice for Cheshire residents, etc...

I'm famous for getting the wrong end of the stick but I seem to recall that the last time our newly re-elected PCC he was padding out his (rather generous) Police pension in this positionand he didn't actually achieve all that much.

It's such a shame that the UK continues to support these ridiculous PCC posts, created (if I recall correctly) by disgraced former Prime Minister, David Cameron, after a junket trip to New York.

Mark Goldsmith
To my understanding, the 240 new officers mentioned are Cheshire Constabulary’s share of the 20,000 extra officers promised by the government.

With 43 UK police forces, you would expect Cheshire to get 465 new officers though, not 240. However, we are getting fewer because the Home Office is allocating them according to crime levels and as a lower crime county, we get fewer.

On that basis too, Wilmslow is very unlikely to see any of these extra 240 officers either.

I suspect that you are correct in assuming the 240 new officers mentioned are Cheshire Constabulary’s share of the 20,000 extra officers promised by the government.

But this is exactly why I think the PCC is being mischievous with the figures.

The 20,000 extra officers are also being measured against a baseline “Head Count” established by the Home Office and measured at 31 March 2019. The baseline head count for Cheshire Constabulary was set at 2080. (Does that number sound familiar!)

The actual head count figures for Cheshire Constabulary are as follows:

All of these figures have been taken from Home Office datasets available from http://www.gov.uk

He's not been in the job for a week and already seems to be spinning a web of misinformation.