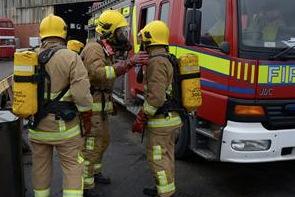 Fire crews were called to smoke issuing from a flat in Lacey Court just after 9.30am today (Wednesday, 3rd November).

Upon arrival they isolated the electricity and firefighters, wearing breathing apparatus, used a hose reel jet, a hose reel and a covering jet to put out the fire.

They then used a large fan to disperse smoke, checked for hotspots with a thermal imaging camera and dug out the affected area.

Everyone was accounted for and one man was checked over for smoke inhalation.

The fire is believed to have been in a cupboard housing the electrical consumer unit.

Crews were at the scene for around three hours.