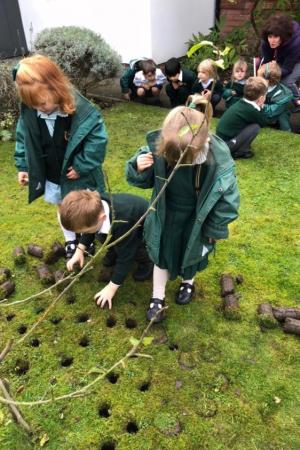 The Rotary Club of Wilmslow Dean are hoping for a wonderful spring display in the town having purchased 5000 purple crocus bulbs to be planted in and around Wilmslow to raise awareness about polio eradication across the world.

Since 1985, to rid the world of polio has been a key priority for Rotary and whilst there have no polio cases in the UK for many years there are a few countries in the world that still have cases.

Purple crocus bulbs has become the symbol of their annual end polio campaign, with the colour purple representing the purple dye painted on to children's fingers to identify they have been administered with the polio vaccination.

Members of Wilmslow Dean Rotary Club (WDRC) have planted 1200 at the corner of Chapel Lane and Bedell Lane, with the help of Wilmslow in Bloom members, and nine local schools are supporting their campaign by planting the rest so they are in bloom next spring.

Mr B Lavagna-Slater, Headteacher at Wilmslow Prep School, said "Kindergarten & reception children were delighted to receive & plant the giant crocus at the entrance to the school. They gave each bulb a name. During assembly they spoke about the important work WDRC we're doing to support the campaign to end Polio."

Miss Zoe Wilson, Headteacher at Lindow Primary School, said "Our after school club planted the crocus in front of the school. They researched WDRC polio campaign and the children have written about it."