Have your say on proposed increase for policing precept 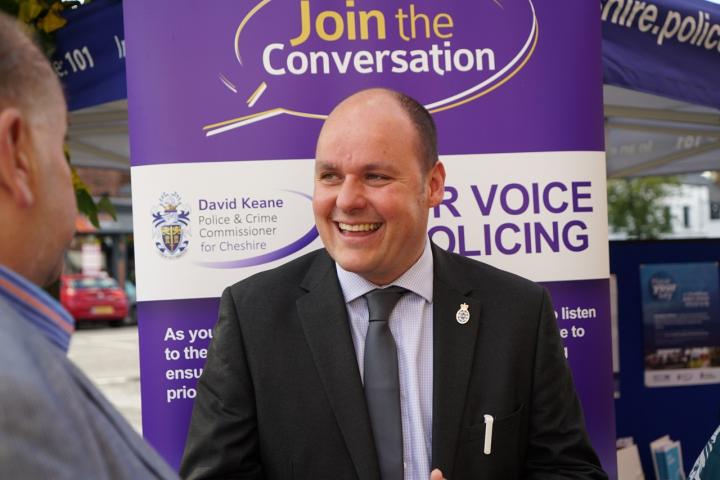 Cheshire's police and crime commissioner is asking residents and businesses for their views on how much council tax they pay towards local policing.

PCC David Keane has today (Tuesday 7th January) launched an online consultation to ask local people if they would be willing to support up to a maximum of £2 per month increase in the policing precept for the average band D household.

He said: "Over the last decade police funding has been subject to stringent funding cuts from central Government.This has seen the policing budget in Cheshire decrease in real-terms year-on-year since 2010. In a decade where demand on policing has increased by one third, and become increasingly complex, the government's programme of austerity has meant that Cheshire has suffered a big decrease in police officers, support staff posts and other essential resources as we've struggled with more than £60 million of real term cuts.

"Whilst imposing cuts nationally, central government has dictated the shift of the funding burden onto local residents, requiring commissioners to consult on raising the policing element of council tax. Whilst I believe that policing should be funded from government as the first responsibility of the state is keeping its people safe, I promised to protect our public and our public services and to carefully listen to the views of local residents.

"Historically, this annual consultation is set around the government's Provisional Police Funding Settlement which local police services usually receive in December. Due to the late general election in 2019, police services are yet to receive their Provisional Funding Settlement for 2020/21 so we have to work on an assumption of the continuance of a flat-cash settlement from Government with no additional funding to support additional demand or to cover pay and price inflation. The chief constable has advised me to consult with Cheshire residents on a precept that enables him to deliver a police service which keeps our communities safe.

"At £200.44, the police element of band D council tax in Cheshire is currently the ninth lowest in the country. And thanks to the support of local residents in last year's policing precept, we have delivered on our promise of locally recruiting 43 officers in the last nine months.

"We are also expecting to see some of the police officer posts, of the circa 21,000 that have been lost over the last decade, start to be replaced by the government funded national uplift programme. Cheshire are expecting to see 30 of these officers this year which will start to help us reverse the effects of austerity on policing but while these officers may be funded, there appears no protection for the current budget and for current officer numbers in Cheshire to be maintained.

"Therefore, the chief constable and I are asking residents and businesses in Cheshire if they are willing to support up to an extra £2 per month increase for the average band D household. This will enable the chief constable to invest in a number of areas which are operational threats for Cheshire Police including county lines, major crime and modern slavery and human trafficking."

There will also be a number of roadshows held across Cheshire where residents can talk to the commissioner directly about their views on the precept and complete the consultation survey face-to-face.

The nearest public consultation events will take place at Sainsbury's in Macclesfield on Friday 17th January from 10am to 12noon.

Cheshire residents can also give their views by completing a survey on the Cheshire PCC website.

The consultation closes at midnight on Sunday 26 January 2020.

Keane was coming back to Alderley Rod to resolve the parking issue if you recall ... No Show...
He employed his ex council colleagues in a ridiculous charade and re opened Stockton Heath police station empire building incurring significant cost ...

He should save us all a lot of tax dollars by doing the honourable thing and resigning... But he isnt and he wont .. He is not needed His role adds no value.

Not one more penny !

Brian Tickner
Was it also not David Keane who wasted hundreds of thousands of pounds on a failed prosecution of our previous Chief Constable?

Alan Brough
The office of the P&CC is an unnecessary, costly, political obstruction to the efficient running of the Police service and until it is either removed or restructured I would strongly object to any increase in the Police precept.

I have completed Mr Keanne's survey to that effect and hope that others will do the same - maybe that way, he'll finally get the message!

Julian Barlow
We're chasing rainbows with this guy. Acceptable levels of service are always another tax payer £1 away and are seldom delivered. He has a track record of squandering public money and then claiming poverty and asking for more.

We've all been affected by austerity, the commissioner needs learn how to work to his budget like everyone else has to.

Ian Tasker
It's the thin end of the wedge. Once commitments are made to pay for police services locally, that's it. It will never again revert wholly to central government, which the PCC admits should stump up. Is this how Boris Johnson proposes to pay for 20,000 extra police officers? Smoke and mirrors!

Michael Maddox
Pay more? We should be paying less!

As a resident of Handforth for over 56 years, we very rarely see a presence Police Officers or their vehicles in the area. Apart from said personnel visiting local Cafe's like the Costa in Next.

Oh, apart from an old Police vehicle left outside either M&S, Tesco, Boots or Next during the day and/or night, I suppose as a deterrent to ward of potential would be Criminals.

It would be nice if someone could come and de-frost the vehicle just to re-assure People that the vehicle actually moves!

Laurie Atterbury
I’ve never understood why it is only people that pay council tax pay for the police.There are others that do not pay council tax so why don’t we have a system that enables all those able to pay do indeed pay? This council tax is a very outdated method of raising revenue for local services that non council tax payers benefit from.

Manuel Golding
Keane's track record whilst PCC is his own continuous history of all that is very wrong with trumped up petty officials such as him. He embarked on his own empire building at some considerable cost to his budget -opening-up a disused police station with added unecessary costs; employing his political pals (one as his assistant who had no knowledge, as she subsequently proved, of police work)& political pals we are led to understand. He made great play of visiting the parking chaos on Alderley Rd & then promptly disappeared without any positive help that we have discerned. He spent a fortune pursuing the previous chief constable in what appears to have been a personal vendetta on the public purse.
Finally his priority appears to be one of playing his party's politics (and shame on that lot).
And now he has the nerve to request an increase in the police precept - put your house in financial order Mr PCC before you a) ask for more money & b) seriously consider not standing for reelection.