Hockey: Wilmslow forced to settle for draw with Sheffield Hallam 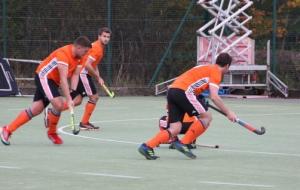 Wilmslow men's first team drew 3-3 with Sheffield's premier side at Oakwood Farm. The men in orange were on top for most of the game but were left to rue multiple chances as they lost ground on the leaders at the top of North Division One.

After a positive start from Wilmslow, Sheffield took the lead against the run of play from a short corner. Wilmslow responded quickly when David Boddy arrived at the back post to tap in from Joe Booth's ball across the D.

Shortly afterwards, Simon Swatland made a solo break down the left hand side and pulled the ball across the D for Booth to fire high into the corner to give Wilmslow a lead ahead of half time.

Wilmslow continued their dominance into the second half and extended their lead when Swatland combined with Andy Hunt to set Booth up for his second goal.

However, Sheffield regrouped and grew back into the game and halved the deficit with a breakaway goal. The game opened up and Wilmslow creates multiple good chances to finish the game off and secure a win but couldn't find their lethal touch in the D.

Sheffield took advantage of this to draw level and Wilmslow managed to withhold some pressure in the last 2 minutes to come away with a draw when a win would have been a better reflection of the game.

In other games: Mens 2nd returned to form with a most convincing 5-3 win away against Lancaster Univ 1st

Mens 3rd also hit top gear with a 4-0 win against Deeside 4s to take them out of the relegation zone.

Mens 5s were the only Wilmslow team to lose, going down heavily 1-11 to Leigh 2nd team

Weather (frozen pitches) caused the cancellation of the Ladies 1s, 3s and 5s however the Ladies 2s turned on the style with a comprehensive 5-0 thrashing of Crewe Vagrants 2nds. Jenna Mapes scored 2 and Di Law, Tracey Moir and Nicole Mellor one each.

Ladies 4s are now clear at the top of the table and beat Lymm 4s 4-2. Penny Sparrow kept up her scoring run with 2 goals and Layla Webb and Sam van Dellen scored one each.