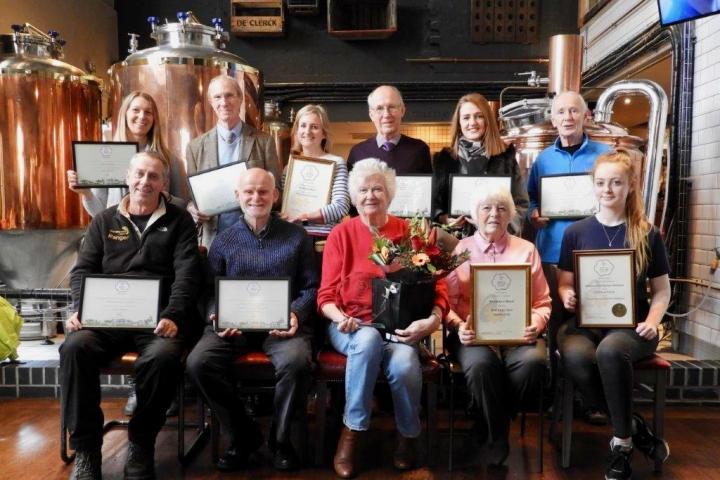 Representatives of the groups which made the town bloom again this year came together to celebrate Wilmslow's award of the best large town in the North West.

Wilmslow retained the 'Pride of East Cheshire trophy', won its fifth Gold award and was judged the 'Community Champion' of the area in the 2018 RHS North West In Bloom competition.

As the 'Best Large Town' Wilmslow has secured the honour of representing the North West in next year's national In Bloom finals.

Additionally, The Gardening Club at the United Reformed Church; Chapel Lane Business Group; Friends of the Carrs; Incredible Edible; Lindow Common; the Rotary Club of Dean Row and Transition Wilmslow all won awards in the 'It's Your Neighbourhood' category. Whilst The Brewhouse won a gold again, bringing the total tally of awards and trophies to twelve for the town.

The tremendous efforts were also supported by local schools and around 70 businesses who put out colourful planters and the town council who provided hanging baskets.

Ruth McNulty, Chair of In Bloom, said "We thought we'd done well last year, when we brought home eight awards, including a Gold. This year's achievement of twelve awards is marvellous. This recognises not just the huge amount of work undertaken but the skills and determination to maintain displays through the hottest, driest summer we've enjoyed for some time. The Judges are always looking for improvements in the town and we obviously demonstrated this in spades."

The In Bloom team is bringing forward their preparations for the entry in to the National finals next year. The theme will be 'Wild about Wilmslow' and will continue with the emphasis on pollinating plants and the encouragement of insects, particularly bees. If you would like to help call Georgie Johnson on 07770 931231.

Ruth McNulty
With Wilmslow as the town representing the North West in next year's national finals, this is a huge opportunity to both showcase and promote the work and the advantages of volunteer groups in our town. The key element we have been able to demonstrate is the ways in which local volunteers give their time, effort and determination to help make our town look better and brighter.
The difference that local volunteer groups have made to the appearance of Wilmslow is substantial. Chapel Lane has been transformed significantly - without significant cost - by a collective will to decorate and tidy the area principally using plants. The Memorial Gardens are substantially enhanced with the roses planted and maintained by the Rotary Club of Wilmslow Dean Row.
These are but two examples. There are other volunteer groups in Wilmslow that may have ideas about the ways in which they. too, could contribute. We would welcome your ideas and involvement
If you would like to join any one of the groups working to help make our town an even more attractive place to live, work or visit please could I encourage you to contact Georgie on the number above or bowl up to the next gardening session run by Incredible Edible next Sunday 2 December by the library. Come armed with a trowel!
Please join us

Mark Goldsmith
Congratulations to the team on winning this award, which is a great acknowledgement of all the hard work they have donated to the town.

The flowers in Wilmslow have looked spectacular this year and have really brought some much appreciated colour and cheer to our streets.

Well done to all.

Ruth McNulty
Wilmslow In Bloom is not simply about 'flowers' but is also about the contribution from the wider community and about the sustainable processes encouraged. This entire endeavour looks to the processes around the gardening. It's significantly about the ways in which YOU could help contribute to enhance the appearance of the town.
If you have unoccupied greenhouse space, could you let us know, as we struggle for space in the early part of the year to bring on plants from seed. If you have spare home-made compost or soil improver, could we take a bag or two to enrich the soil in town centre beds? Do you have an spare water butt that we could use to help irrigate sites around the town?
And, of course, if you do have some spare time, bring your trowel along to our monthly sessions or create your own beds in the town centre - we'll help identify appropriate sites.
Wilmslow has the honour next year to represent the north west in the national finals and the focus will be on that which we can achieve. The In Bloom team will be working our collective socks off and your contributions could make all the difference.
Fingers crossed - and many thanks