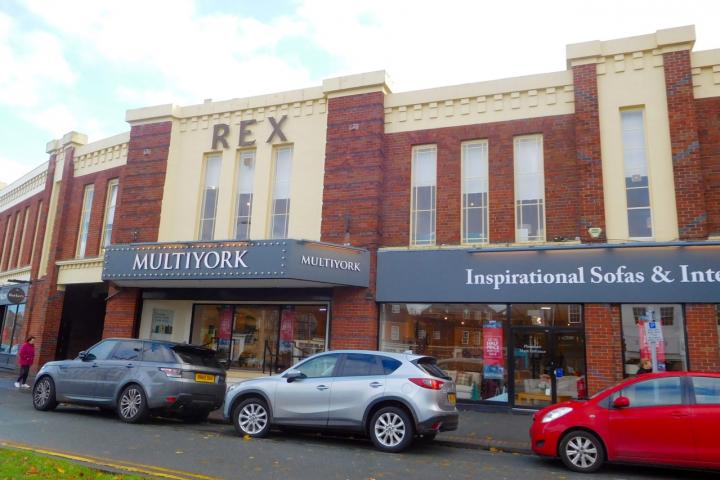 At its meeting on Monday, 15th October, Wilmslow Town Council unanimously voted to award a Grant of £21,219 to the company that will be running the Rex Cinema.

The money will go towards the costs of installing a disability access lift and covers half of the cost.

Making a recommendation as Chairman of the Finance Committee, Cllr David Pincombe said "The amount requested is approximately half of the costs of installing a lift and a third of the total costs they anticipate spending on providing access and further facilities for disabled persons.

"The Finance Committee in forming its recommendation were provided with an overview of the ambitious plans to bring back to life the Rex Cinema. This will include two viewing screens a bar and lounge facilities providing drinks and snacks, along with other amenities that can be enjoyed by the community of Wilmslow and beyond. The applicants Mr And Mrs Mundin talked to the Committee about maintaining the integrity of the original auditorium as an existing structure along with the original ceiling façade. They also paid tribute to the Rex Revival Group who has done a magnificent job of promoting the Rex in Wilmslow and the wider community.

"During their overview the applicants made reference to four other cinemas in a similar state to that of the Rex that they have fully restored and are now thriving and seen as a great asset to their local communities. They feel that when the Rex is refurbished it will also play a similar role in helping restore and breathe new life into the centre of Wilmslow."

Cllr David Pincombe added "We were impressed by the documentation provided, which included a breakdown of detailed costs for refurbishment, financial details of costs associated with their other theatres and an array of the type of entertainment provided that would be replicated within in the Rex cinema.

"All questions posed by the committee were answered in a very satisfactory manner and we were left in no doubt that the project to restore the Rex was not just a commercial venture but also a commitment by a family group to bring back to life some heritage that has been lost for too long."

After the meeting Cllr Angela McPake, Vice Chairman said "We are often asked as to what Wilmslow Town Council is doing about the increase in empty shop units and the resultant impact that this has on the vitality of the Town Centre. In reality the Town Council is unable to impact landlord rents or business rates which are often sited as major contributing factors in the increase in vacant units. What the Town Council can do is recognise that when an opportunity arises, that has the overwhelming support of the public and that has the ability to act as a catalyst to enhance existing businesses and to encourage new, it takes action to consider what support is appropriate. In this instance the feedback received through the emerging Wilmslow Neighbourhood Plan was that not only do the people of Wilmslow want a cinema in the town centre but also that the use of the Rex Building to deliver such a project was vital in putting a heart back in to the town centre and in using this iconic building for the purpose it was intended.

"The Town Council recognise that the age and design of the building makes access improvements difficult and costly but felt that it was critical that such an exciting development for the town must be accessible to all sections of the community. In providing this grant it was noted that the largest proportion of the access costs will be funded by the Mundin Family who are also committed to providing audio and visual aids. I am delighted to hear that the public are embracing the Rex by taking out membership packages well in advance of the opening and am as excited as anyone to find out the date when the Rex will re-open."

Wilmslow Town Council also approved a £5000 grant for Food Friend to enable them to continue their extended food bank project which began in 2011 to provide support for individuals and families who for whatever reason found themselves unable to put food on the table. With the help of Wilmslow Town Council they extended the provision in January 2014 by having St Batholomew's Church open 5 mornings a week and the project run by a trained councillor. See separate article for more details.

Wilmslow & District Furniture Recycling was awarded £400. The voluntary organisation is based on the Lacey Green Estate where it collects reusable furniture and household items and redistributes them to families in need. The grant will be used to fund 50% of a trip to see the Sleeping Beauty pantomime in Stockport along with a pre-pantomime meal at McDonalds for about 21 children, from single parent families or children in foster care, who have been supported in recent years along with a few accompanying adults.

Alderley and Wilmslow Musical Theatre Company were awarded a grant of £3641 to cover the cost of hiring the Evans Theatre for a week in November when they will be performing Joseph and the Amazing Technicolour Dreamcoat.

Jon Williams
£21,000 for a new business venture, I know a lift is a must, but it should be paid for by the new owners, not the public

If, "a lift is a must", then that should be a requirement by law. However, there is no such law that requires the new operator to install a lift. They wish to do so for the benefit of those with mobility impairments.

This is why the new operator has asked for support from the Town Council to help them make the facility available to "ALL”.

Two thirds of the money required to make the Rex accessible and usable to people with a mobility impairment is being provided by the operator. I welcome and admire the operators invesment, along with the support of Wilmslow Town Council, which ensures that this facility will be accessible to “all”.

Barry Buxton
I agree with Jon W. If the business owners need additional short-term finance for the lift WTC could offer a loan instead of a grant. The loan would be repayable upon reaching certain profit levels in the business.

Tony Hughes
The age of the building means the new tenants don’t have to put in a lift. There are a number of refurbished cinemas across the country without disabled access that prove the point. It is also difficult to stack up a commercial case for making in excess of £60k of investment in a lift, the payback time would be extensive particularly if you didn’t have to do it in the first place.

It is therefore to the Mundin’s credit that they are prepared to make the extra investment to allow access for as many people as possible. Particularly when the overall refurbishment costs must be substantial without that addition. As someone who has dealt with pushchairs, wheelchairs and relatives with mobility issues in recent years, this lift would have been the difference between getting to use a local facility or not. There are also putting in the majority of the investment to allow disabled access, the Town Council are putting in the minority.

I would have thought helping all residents enjoy the amenities of the town would be a goal of the town council and therefore making a contribution to this facility makes a lot of sense. Given at one stage the Town Council were investigating the possibility of running a community cinema in the venue, because of the level of community support, approx. £20k investment looks like small beer in comparison to what may have cost!

Ian Kennedy
The new Rex cinema is a business venture which I hope will be supported by the people of Wilmslow. Provision of an access lift is a good idea but the finance should have been in the form of a loan - repayable when the business is successful.

Sophie Taylor
The negative comments on here are disappointing.

The Rex owners are still paying the majority of the cost of the lift, by choice. This lift will enable *all* residents to enjoy something that our town has missed for too long, and that will bring happiness to many.

Wilmslow Town council giving this money to the Rex means that the Mundins have £21,000 more to spend on making the cinema brilliant. The success of the Rex is something that we should all want to see as it will benefit the whole town, restoring a focal point for the community and supporting local businesses.

The amount given by the Town Council works out at approximately £1.75 per Wilmslow home, for the lifetime of the lift. Given that the return of the Rex will probably boost the economy of Wilmslow, £1.75 really isn't much to complain about, especially when it means the cinema is accessible to all.

Thank you to the Mundins for going the extra mile, and to the Town Council for fulfilling their promise to support the return of the Rex.

David Broadbent
I feel that the WTC have made a sensible, balanced decision on making a grant for a lift.
Long term it will be a minor cost for increased access and enjoyment of the cinema by all residents. Stop the criticism and fully embrace the fantastic return of the Rex.

Ella G
Well done to the Mundins for investing in our town! This cinema will be the catalyst the town needs to rejuvenate and once more become a place people want to invest in and spend time in. As others have said, they had no requirement to put a lift in. But as can be seen at their other cinemas, this family goes the extra mile to bring a high quality experience to all!
If critics realised the level of investment required to bring the cinema back to life, I think they'd be surprised... Not to mention the incredible rents which are causing shops to continue to close in the town centre!

Pete Taylor
It's not all that long ago that WTC were recommending the purchase of a new chain of office for their Chairman- priced, if I recall correctly just over £12k. After some of us howled in protest they scrapped that daft scheme, it's good to see that some lessons have been learned and our money is being spent on...us!

Stuart Redgard
I do not know for certain, but I assume that Wilmslow Town Council are prevented by law from giving out loans. I will ask the Town Clerk to confirm if my assumption is correct or false.

I can confirm that there are approx 12000 homes in the Civil Parish of Wilmslow so as Sophie Taylor has already said, each household has contributed approximately £1.75 towards this grant.

Christine McClory
Congratulations WTC for having the foresight to help and encourage the proper development of the cinema to give access to all. The redevelopment of this cinema will be an asset to the community and a pleasure for us all to enjoy.

Wendy Falk
Well done and hats off (at last) to WTC. Worth every penny to enable ALL to have such a great community venture right on our doorstep. This will bring people into the area, as there's plenty of parking for everyone (once the commuters have left!), and they'll stay for food and drink. I don't agree with the negative comments on here, but you always have those whatever you do.