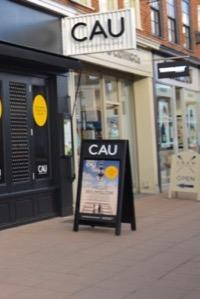 An Argentinian restaurant which opened on Water Lane in March 2015 will be closing imminently.

Deloitte have today been appointed as joint administrators to both Gaucho and CAU restaurant chains.

The group, which operates 16 Gaucho restaurants and 22 branches of CAU, has suffered as a result of the material underperformance of the CAU brand, which has suffered from negative like-for-like sales for three years, and is as a consequence now significantly loss-making.

As such, the administrators' strategy involves an immediate closure of all the UK CAU restaurants, resulting in approximately 540 redundancies, and a focus on maximising the value achievable in the Gaucho business, which is profitable. All of the Gaucho sites will continue to trade 'as usual' whilst the administrators seek a buyer for the business. They will also seek to find potential buyers for the CAU sites.

Matt Smith, joint administrator, commented "Unfortunately the CAU brand has struggled in the oversupplied casual dining sector with rapid over-expansion, poor site selection, onerous lease arrangements and a fundamentally poor guest proposition all being factors in its underperformance. As such, the decision has been made to close this loss-making part of the group with immediate effect, unfortunately resulting in today's redundancies.

"The Gaucho business on the other hand, which operates in the premium dining market, continues to trade well in its market segment, is profitable and has a strong underlying brand and guest loyalty. We are taking steps to stabilise the business following our appointment and are now seeking expressions of interest in terms of a sale of the Gaucho business."

Jonathan Follows
I went to this restaurant about once a year, so I will miss it. I also went to Gaucho in Manchester but found it excessively overpriced and never went on a repeat visit; some will say the same about CAU perhaps but for me it struck a better balance.

Marc Staples
I went once and to be honest the £38.00 steak was not great . Over priced for mediocre food .The Miller and Carter far better value and great steaks. The only loss is another empty building but we cant blame CEC and greedy landlords this time

David Smith
I had a great Argentinian steak years ago - in Buenos Aires, so was looking forward to CAU opening. However reports from friends were that the steaks weren't great, and were the only thing included in the price with everything else extra.
Never went because of that and am not sorry. Typical scenario - the eating public are wanting something other than the bog standard food dished up in a franchised chain that is only there to make a profit out of our palettes. Now if some Argentinians were to come over and set up just ONE restaurant in town and do steaks like back home - we eaters might stand a chance of somewhere great to go regularly and it might be a success.

Lynne Fowler
Agree with the above comments - the only surprise is that CAU lasted as long as it did. I went there once with family several years ago, and remember gasping slightly at the menu prices - as David said, a chain restaurant, who do they think they are (or were)? I also thought it lacked ambience - and who would want to sit and eat outside on that busy bit of road? I don't live in Wilmslow but visit often, and it's a shame to see more empty premises each time I go there, and others that seem to be just about holding on.