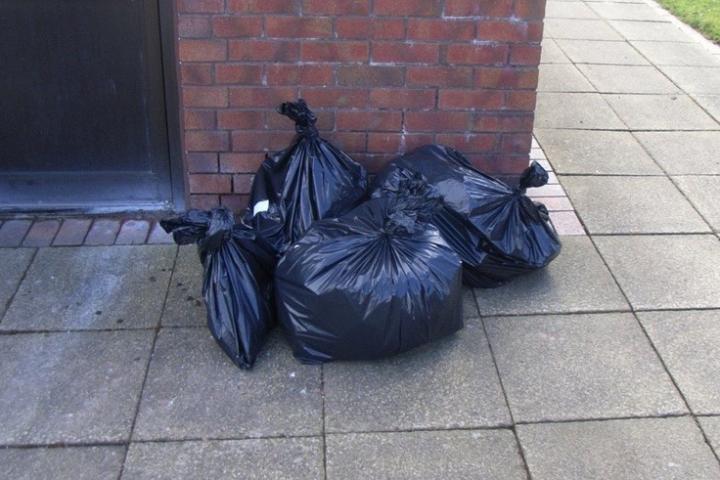 A team of volunteers have taken to the streets of Wilmslow during the past week in an effort to keep the town clean.

Thirteen volunteers met at Summerfields on Wednesday, 7th March, when they focused on the surrounding area.

A spokesperson for Wilmslow Clean team said "The litter on the banks down to the railway tracks from the bridge on Dean Row Road is really bad. We have reported this to Network Rail and received a very positive response– they are aiming to clean all this up in the 2nd week of April.

"We also reported an area of land near the railway bridge to Cheshire East (ANSA) because 2 whole bags were filled up with empty beer and wine bottles. ANSA confirmed that this is the back entrance to Wilmslow Cemetery and have flagged it up as an area where anti-social behaviour taking place. We also found lots of empty nitrous oxide canisters.

"We found some really disgusting areas where dozens of bagged up dog poo bags had been left in hedgerows and hanging on trees. This is unfortunately a common experience. Dog owners need to take more responsibility for disposing of their dog poo bags."

In total 19 bags of litter and other debris were collected.

Nine volunteers met on Saturday, 10th March, and spread out to cover various parts of the town centre. The areas around the railway station and Sainsbury's were particularly badly littered and around 20 bags of litter were collected. We collected around 20 bags.

The spokesperson added "We collected 39 bags in our scheduled picks, but there has been a lot of activity recently including a blitz on Burleyhurst Lane in Mobberley and some solo picking by our volunteers. We have collected 72 bags, since the last month's report, which is amazing."

Simon Worthington
Just have a quick look behind most of the town centre restaurants Cau for starters (no pun intended).

Robert Kemp
Instead of relying upon volunteers to clean up our town why don't we get those sentenced in court to carrying out "community service" to do this work. It would probably mean employing a couple of people to supervise their work but it would be more beneficial to the general public than much of the duties presently assigned to these miscreants.

Buster Wild
The worst place for litter and rubbish in the Wilmslow area must surely be the bypass, from Handforth Dean to Wilmslow both sides. With traffic held up due to road works, people have time to notice the loads of trash and fly tipped waste that brings shame to our town. No doubt the council will point out that due to safety regulations, nobody can work within so many metres of a roadway. But as I stated, the traffic is moving at a snails pace anyway.

Jo Crinson
Walking down Adlington Road to walk my dog along the River Bolin, I am amazed at how much litter is discarded on the road. The litter is predominantly take away and fast food wrapping, drinks bottles and cups. I can only imagine this has been discarded from passing cars since there are no food outlets close enough for it to be from pedestrians. Appalling.

Stuart Redgard
I am a member of Wilmslow Clean team And part of the organising committee.

#Simon Worthington.
Wilmslow Town Council, Cheshire Fire Service and wilmslow Cleanteam have all raised the issues relating to rubbish behind CAU and all other commercial properties on that section of Altrincham Road. I am sad to say that it has had little effect. It's private land , so they can basically do as they please.

#Buster Wild
Members of the cleanteam would agree with you. Unfortunately as there is no pedestrian access or safe working area along the road, so it is not safe for us to litter pick on this road. Instead we are reliant on CEC's contract Ansa to clear the rubbish. They only do this when traffic safety measures are in place when CEC Highways do maintenance work. Be assured that the we chase ANSA on a regular basis to make sure they do this as and when the safety measures are in place.

John Clegg
When I'm out exercising, I'll pick up rubbish and, if it's bin day, deposit the detritus in the relevant bins. So it's recyclable rubbish on some Mondays, and other rubbish a week later.

I'll even pick up poo bags if there's a bin nearby.

I asked the council if more recyclable rubbish bins could be made available - not that it would do much good if people just lob stuff out of their cars - but this isn't an option due to spending constraints.