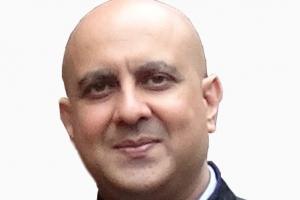 A local NHS surgeon has been chosen by members to join Wilmslow Town Council to represent the Lacey Green ward.

Following the resignation of Bradley Russell, voters in the Lacey Green Ward were invited to request an election but they did not so, because the Council's term has more than six months to run, they were required to co-opt an individual to Wilmslow Town Council.

Councillors agreed to seek nominations from individuals who wished to take up the role. The Chairs of all the Council's committees, and any other members who wished to attend, interviewed all the candidates following a short presentation from them as to why they were seeking co-option.

Then at the Town Council meeting on Monday, 17th July, they voted for their preferred candidate to fill the vacant position on Wilmslow Town Council.

Dr Chetan Katre, who lives in Wilmslow East, is a Consultant Head and Neck Cancer and Reconstructive Surgeon working in the Manchester area.

He previously stood as a candidate for the Wilmslow East ward in August 2016 when voters chose Mark Goldsmith (Residents of Wilmslow) to represent them.

Speaking at the time Dr Chetan Katre told wilmslow.co.uk "As someone who works in the NHS, I have a keen interest in road safety and will make this a top priority. I also want to improve Wilmslow as a place to live. The Town Centre and surrounding areas have benefitted from work that the Town Council has already done, but I believe there are many more opportunities."

Dr Chetan Katre has backed the ongoing work to create a Neighbourhood Plan for Wilmslow which will feed in to the Cheshire East-wide Local Plan.

He told wilmslow.co.uk "The Neighbourhood Plan is an excellent idea giving residents of Wilmslow a say on how their town develops. I support the cross party view of all Wilmslow Town Cllrs that on the Royal London site new offices are needed for continued economic vibrancy, but that it is the wrong place for housing."

Dr Chetan Katre also highlighted the pond and stable block near Wilmslow Leisure Centre as an area urgently in need of improvement.

He said: "This is an area that has been neglected for too long. The pond is a potential danger to children using the Leisure Centre, and it is also an area that could be very beautiful. The stable block is in urgent need of repair and could provide accommodation for a local business or organisation, or a community hub for Wilmslow."

Councillor Martin Watkins, Chairman of Wilmslow Town Council, said "Wilmslow Town Council is pleased in welcoming Mr Chetan Katre as a co-opted member to represent the Council's Lacey Green ward following the resignation of Bradley Russell. We look foreword to his contribution to public life in the town."

Sarah Brown
Lets hope he advocates making the stables a community hub, there's plenty of under utilised office space in Wilmslow, it would be good to have something in the public and local interest.

Luke Baker
What are his actual views on Lacey Green? Shouldnt they be something we should know about?

David Smith
These are some of the battle areas:
1. The Cheshire East planning policy, department & system is not fit for purpose. It says a lot but doesn't stand by what it says.
So Dr Katre you are intereted in road safety? I wonder how much!
2. PARKING: EVERY residential street in Wilmslow is sick to death with visitors parking and then walking into town for work and leaving their cars there all day. Sometimes it is for a few days whilst they go away. Our street in Lacey Green ward was built for 2 lanes - one in and one out. It has now become a single lane road because we are letting motorists from outside the area save £5 per day by parking in our road. We can't get in and out easily any more. How about we start to get £5 per day OFF our council tax until the issue is sorted? How much longer before our streets become a car park for Manchester airport? Complain to your local councillor and you quickly realise what a load of useless ditherers these people really are. All talk and no action. The long stay near the leisure centre needs to be a 10-storey car park for thousands of cars. It is out of the way and isn't going to have an impact on traffic in the town providing the EXIT is onto the bypass and not the town. You can enter it from the town but not leave that way. Cost? Well invite tenders from the major car parking companies to build it and then keep 100% of the charges for a fixed time period after which they manage it and the council takes say 50% of the charges. New ideas are what we want. Whilst mentioning cars - why do we have to put up with all these boy racers with noisy exhausts making a racket just for the sake of it. Is everyone else deaf or just can't be bothered?
More car parking issues: Manchester Road near the Styal Road end now has motorists parking there all day - IN THE CYCLE LANE. Isn't a cycle lane for cyclists? If there is a car in it a cyclist has to pull out to pass the car and then is vulnerable to getting knocked off: = accident. The police say: it is only an advisory lane so it's ok. How pathetic and crass. Manchester Road has a 40mph limit because of the width and forward visibility - otherwise it would be 30mph. 40 mph is ok on Christmas day when there are no cars parked along it and only a few cars out. During the day it NOW has cars parked along much of it, motorist day parking, van deliveries and tradesmen working at the various houses nearby. So it isn’t wide any more and neither is the forward visibility good enough for 40mph. It should now be 30mph. Now here’s a scenario: in a 40mph limit many drivers will be doing 45-50mph and the boy racers a bit more. Heading towards Styal Road the limit changes to 30mph. These speedsters will then take their foot off the accelerator and hardly have slowed down by the time they are heading down the hill towards the river Bollin. After Styal Road, Manchester Road takes a left curve, there are delivery vans parked and large vehicles coming up the hill, possibly overtaking a parked or stationary vehicle. Whoops - stand on the brakes, hit another vehicle at 50 mph, cars overturn and go off the road and onto the pavement or into someone’s garden. Walking up from town is a group of schoolchildren after school who are all killed. This is thinking before the event and not waiting until afterwards like in the London Grenfell Tower block fire to realise that things should be different. The problem facing the council, now that I have raised this situation and the possibility of an accident, is that if the council does nothing, the leader of the council will ultimately be held responsible and have to resign and perhaps face charges. So get on with dealing with the danger that car parking has now become in Wilmslow.

Pete Taylor
dr Katre said: "I support the cross party view of all Wilmslow Town Cllrs that on the Royal London site new offices are needed for continued economic vibrancy, but that it is the wrong place for housing."

That is most certainly not the view of the Residents of Wilmslow Councillors and I'm not sure that it is the current stance of all of the Conservative Councillors.

I find it rather strange that WTC decided to co-opt a person who was rejected by the electorate in his own ward to represent another ward right across town.

Any eligible resident (not just Lacey Green res.) was entitled to be considered.

His correct title is MR, not Dr, a distinction important to most surgeons.

Mr K received the majority of the votes.