Wilmslow High through to national final of speaking contest 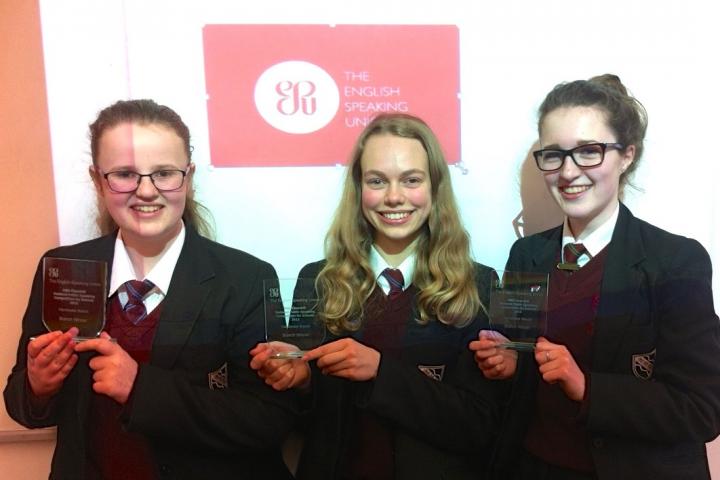 Wilmslow High School has secured a place in the national final of a prestigious public speaking competition.

Over 400 teams entered the ESU Churchill Public Speaking Competition this year which have now been whittled down to the eight best teams from across England and Wales.

The team from Wilmslow consists of three Year 10 students: Georgia Brown, Katy Walker and Olivia Willett. All three girls were delighted to win their regional final against some extremely strong competition and progress to represent the North West region in the final, which will be held at Churchill College, Cambridge on Saturday 25th April.

English teacher David Spence commented "This is a fantastic achievement and just reward for the hours of preparation the team has put in over the course of the competition. We are very proud of them and we're sure they will represent the school with distinction at the national finals."

The competition, which runs from October to April, is open to teams of three students in Key Stage 4 (Years 10 and 11) and each team member takes one of three roles – chairperson, speaker or questioner. Students who participate in the competition develop their knowledge of topical issues, while enhancing their speech writing skills, their speaking and presentation skills and their ability to think analytically on their feet.

Over the course of the competition so far, the Wilmslow team has had to handle topics as diverse as: 'Loyalty to country should trump all other concerns', '24 hour news has led to worse, not better, informed citizens' and 'An over examined life is one not lived.'

Deputy Head Mark Vincent added "At all stages, the team has prepared professionally, displaying maturity, sensitivity and appreciation of the complexity of the topics."