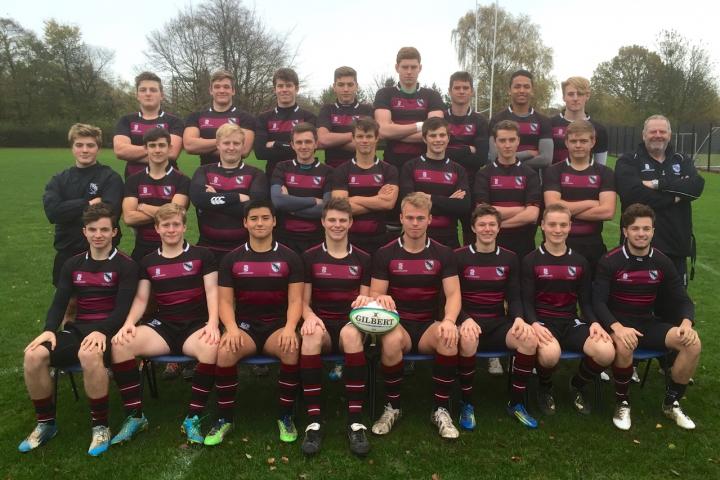 Stonyhurst College were the visitors to Wilmslow High School on Wednesday afternoon as both school's senior rugby teams battled it out for a place in the last 16 of the Nat West Cup. Stonyhurst came into the match confident and unbeaten, with impressive wins over Kings Macclesfield, Yarm, Ampleforth and Lancaster Grammar School this season.

The visitors started strongly playing with the elements in the first half. The big, dynamic ball carriers in their pack hammered into Wilmslow's defensive line and their skilful centres created problems for the backs. Wilmslow stood resolute though and after withstanding a ferocious onslaught in the first ten minutes, found their feet and put together some cohesive drives up the field, with the pack working together and punching holes in Stonyhurst's defence.

For the remainder of the first half, the Wilmslow pack were relentless and sure enough the pressure told with a try from number 8, Sam Haley. Playing on the front foot, confidence grew and it was only some outstanding Stonyhurst defence that prevented Wilmslow extending their lead.

With the score at 5 – 0 in their favour, Wilmslow would've fancied themselves to kick on in the second half, but some loose play from the home side and poor ball retention, gave the visits some confidence and it was Stonyhurst who took the game by the scruff of the neck at the start of the second half.

The home side reacted strongly though and some direct running and excellent work in the contact area brought them back into the game. A series of forward drives meant that Wilmslow were able to stretch the Stonyhurst defensive line to breaking point once again, with Christain Taylor going over for the second try, extending the lead to 10 – 0. A converted try from the visitors 20 minutes into the second half increased the tension, and it was only a last ditch tackle late in the game from number 8, Sam Haley that prevented Stonyhurst taking the lead.

Faced with the prospect of losing their lead and a game that they had dominated for long periods of time the Wilmslow side were stung into action and finished strongly. Year 11 winger, Broghan Wilson made an impressive 30m break, only to be halted by the resolute Stonyhurst defence. There was to be no further score in the game with the final whistle breaking the tension and coming as sweet relief to all of Wilmslow's players, coaches and supporters.

The side now look forward to the next round and a home tie against St Peter's York, with a place in the quarter finals at stake.

Anne Bale
What a wonderful achievement. It sounds like a tense match for all concerned. My husband and I always find the games exciting when we get the opportunity to watch the first team and we hope to attend the next cup match to join in cheering on the first XV.