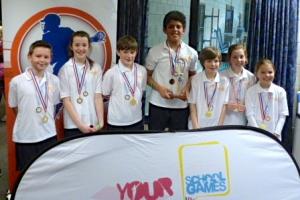 The team attended an opening ceremony of the Manchester School Games at the Manchester City training ground on Tuesday 19th March. Afterwards they competed in the lacrosse tournament at Manchester University against fifteen schools from across the North West.

After a nail-biting match against the reigning champions, Hale Prep, the team were drawn at 5-5. Two minutes of extra time followed, with the team ending with a 2-1 win.

After an incredibly close final match against The Bollin School and a final score of 7-6, Gorsey Bank became the North West Champions and Manchester School Games gold medal winners.

They have now qualified for the National Finals at the University of Hertfordshire in June.

Miss Barlow commented "The team's enthusiasm and commitment really shone through during the tournament, especially during the hard-fought matches. Having only started training in January, they have done amazingly well in such a short space of time. I am incredibly proud of all of them and we can't wait for Nationals!"

Carole Burton
Fantastic, now bring on the second team - please no snow to cancel next time. What a great achievement after such a short time.