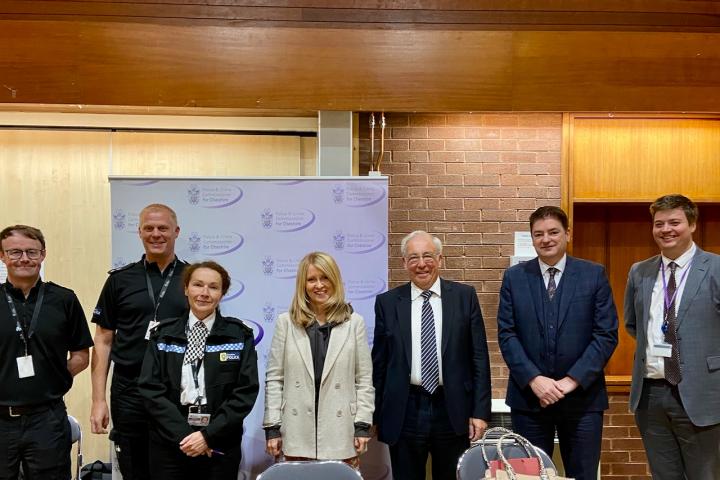 Around 20 local residents joined representatives from Cheshire Constabulary, Cheshire East Council and local elected representatives at a public meeting on Thursday, 23rd September to discuss speeding and anti-social behaviour (ASB) issues on the A34 in Wilmslow and Alderley Edge.

Police and Crime Commissioner for Cheshire John Dwyer arranged the meeting following a large amount of correspondence from residents about the issues the community faces.

He chaired the proceedings where he and the panel took residents' questions and discussed potential solutions to the long-running issues.

John Dwyer, Police and Crime Commissioner for Cheshire, said: "I want to thank everyone who attended on the night and shared their views with me and the panel. I would also like to thank those who were unable to attend on the evening but took the time to submit their questions. The discussions we had and the feedback we received will help us to improve the situation for residents.

"I'm committed to following up on actions identified at the meeting and to finding answers for residents to any questions we didn't manage to get through on the night. This is clearly an emotive subject and something which plagues local residents daily."

Residents were asked to submit questions in advance and the panel discussed a range of issues stemming from them, including what enforcement action the police have already taken on the road, speed and noise cameras, and possible changes to the design of the road to deter the potential for collisions.

John Dwyer added: "A death or injury on our roads is one death or injury too many and I give my assurances that this matter is being taken seriously. Road traffic collisions can have devastating impacts and I am committed to taking action.

"There were a number of pertinent points raised and I know I speak for the entire panel when I say we'll consider whatever solutions are necessary and workable to improve this issue for the local community."

Assistant Chief Constable Jenny Sims said: "Cheshire Constabulary remains committed to making our roads even safer. We will continue to run enforcement operations in the area and work with the local authority and communities to ensure more sustainable solutions are found."

Esther McVey, MP for Tatton said: "I was pleased to be invited to attend the meeting by the PCC and it was good to see so many people in the room who I have been in contact with on this, and many other, issues.

"I also thought the main concerns were well articulated by local residents and whilst most of the issues, it was agreed, sit with Cheshire East or the police, I have taken away some points around legislation and I will be pressing the relevant Ministers on those."

Cllr Craig Browne, Deputy Leader of Cheshire East Council and Chair of the Highways and Transport Committee said: "This was an important opportunity to listen to the views of local residents and I am grateful to the Police & Crime Commissioner both for organising the meeting and inviting me as a panellist.

"Cheshire East Council will continue to work together with our strategic partners in the Cheshire Road Safety Partnership, including the police and other emergency services, to identify appropriate solutions to the issues raised. I look forward to reporting back on our joint progress at a future meeting."

Cheshire Constabulary will shortly be providing a meeting summary which will include information about the actions to be taken and data regarding the number of incidents on the stretch of road including serious, and sadly fatal accidents which have taken place in the last few years.

Ludo McGurk
It would help tremendously if those who design our roads understood how vehicles work. Traffic calming measures cause vehicles to slow down, and they then have to accelerate back to normal road speed. Whether petrol, Diesel or electric this consumes excessive power/fuel, thereby increasing pollution, as well as the resultant acceleration noise and the aesthetic damage occasioned by these lumps, chicanes etc and their accompanying signage. Perhaps spend the money on repairing our local roads and cutting the scruffy roadside foliage in our borough.

I used to work for a firm that designed roads. I can assure you that the people who design roads do "understand how vehicles work". Most of them used cars as their primary means of transport and they also had degrees of some form or another. They design roads to "standards" set down in legislation by parliament.

Traffic calming measures do "cause vehicles to slow down", That's because that is what they are designed to do. They are used to reduce the risks associated with serious harm if a vehicle comes into contact with another type of road user (ie pedestrian / bicycle etc)

What do you mean by "normal road speed".

In the UK we have a limited amount of land that we can use for ALL types of road users. That's because we are an island and our road network has developed over nearly 2000 years ( ie since before the Romans invaded the British Isles).

The vast majority of "problems" associated with roads are primarily caused by their users, not design issues.

You could say that if nobody used the roads then they would not be needed and hence there would be no problems.

Simon Worthington
Really Stuart! Then you will be well aware that the "by-pass" is badly designed and poorly built especially cambers on roundabouts. The roads around our "village" centre are worse with poor traffic light timing, right turns where they should be banned. Exits onto main roads with the view blocked by trees and worst of all the blockade in the middle of the road in Green Lane and the dangerous pedestrian crossing at the entrance to Hawthorn Lane. I was assured by a nice man from the highways department years ago that the blockade would not be permitted then (5 years after installation) yet it is still here now.
Also interesting how our new police commissioner is very keen where votes are around but not so keen on looking into the dodgy actions of the very employees he is supposed to keep an eye on!!!!

Stuart Redgard
Yes, Simon, and you are quite entitled to hold a different opinion from mine and to share it.

I don't object to that at all. I just don't see things the way you do.

David Smith
Stuart Redgard:
As you used to 'work' for a firm that 'designed' roads I would like an explanation of one design feature.
If a vehicle leaves a road on a bend - say, for going too fast in the road conditions - it will in all probability leave the road on the outside of the bend.
So why then do road 'designers' put the lamp-posts and telegraph poles on this side of the bend and increase the chance of the vehicle hitting them with the probability of a more serious accident, instead of on the inner curve of the bend?
It might also be safer thinking in terms of reducing accidents if councils over the years had removed trees from this part of a bend in a road too.
Otherwise the later 'after design' measure for increasing road safety is really only a crash barrier around the outside portion of the bend in the road.

With your self-declared expert knowledge of roads - having worked for a road design company - perhaps you could explain the reason. If you know one?

Simon Worthington
Oh David, rarely do I Iaugh out loud when reading comments on this site but you put some of my thoughts succinctly and the last comment - priceless!!!

As per usual you make assumptions, get things wrong and go off on a tangent. I did not say that I designed roads. I have never designed a road. So I don't have any "self-declared expert knowledge of roads ".