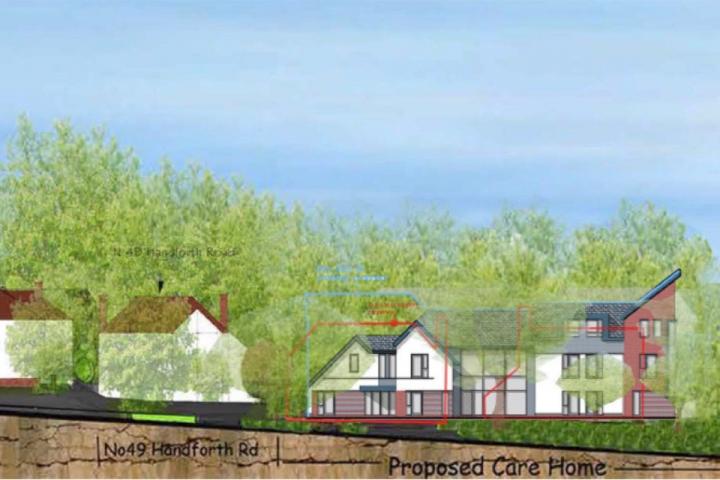 Plans to build a 63 bedroom care home on Handforth Road have been approved by the Northern Planning Committee this week.

New Care Projects won their appeal in August 2020 to enable a new care home to be built in Wilmslow. However, after a two and a half year battle to secure planning permission, the Altrincham based company amended the approved plans in November 2020 seeking to increase the number of bedrooms from 60 to 63 and make minor changes to the elevations.

At their meeting on Wednesday, 13th January, seven members of the Northern Planning Committee voted to approve the plans whilst two voted against and two absteined.

Speaking about the decision, Cllr Craig Browne - Chairman of the Northern Planning Committee, said "Members expressed their dissatisfaction that a government Planning Inspector had seen fit to overturn their previous decision to refuse the application for a 60-bed development on this site (19/3831M) last year, disregarding the views of elected members as well as the concerns and objections of local residents.

"However, by a majority they accepted that in the light of that appeal decision, it would be difficult to sustain a refusal for what had effectively become an application for just three bedrooms."

He added "It is notable that both East Cheshire Clinical Commissioning Group and the Head of Cheshire East Council Adult Services raised objections to the Care Home application, based on there already being excess capacity and a large number of vacancies in Care Homes across the Primary Care Network."

John Harries
NPC - what an utter shower.
Absolutely no reason to override the Inspectors decision based on the revised plans put before him (which itself was a highjack).
The whole system stinks and I suspect, given the unusual circumstances that C-19 has now created in what was already a recognised depressed demand for care home capacity, New Care Projects will probably not rush to commence construction (although they will drop Nos. 51 and 53 Handforth Road pronto - just in case!). They have 3 years 'life' on what has now been 'nodded' through on a good majority by NPC - watch this space.

Jon Williams
Great news, a much needed Care Home and like I said last year "they WILL get it in the end"

Derek Ferguson
If care homes were "much needed" why is there one less than half a mile away that has been sitting derelict for many years?

Jon Williams
Because it was not built as a Care Home !

John Harries
Jon Williams - you've misstated this in the past. It was a modern care home, perhaps not entirely residential but the argument is whether more care home 'beds' are required in our area and why a site already existing with good access and most of the necessary facilities/resources (that could also be upgraded/increased in capacity) was ignored and then sold off to developers only to be resurrected/reinvented 900M away (necessitating demolition of two perfectly good private dwellings) within a wholly residential area.
The local strategic development plan (another utterly shameful disregard of widespread local public opinion) exists - say in less than a mile radius of this recent proposal - there are 3 distinct sites (absolute 'clean sheets of paper'), two of which are now under construction, that could have included (if really deemed/proven necessary) some nursing home provision.

Geoff Ferguson
By now we all know where Jon’s,Mo’s and Adeeba’s loyalties lie, we also know that giving the go ahead to build this monstrosity will affect those living locally from the day demolition starts until, well forever.

As a diversion from this fiasco, has anybody else been watching Coronation St ? One of the storylines is about an unscrupulous,egotistical developer buying houses from gullible,desperate homeowners, aided in his scheme to build his unwanted project by a planning officer, something tells me that he will get his comeuppance, but that’s television for you. Hope Peter Barlow gets better

Simon Atkins
This is such a nonsense from the Council. Rejected 3 times but still gets pushed through. I'll bet the developer will build 65 beds as previously planned anyway and then apply for retrospective planning. That's how it usually goes...

David Smith
It's not what you do - it's how you do it and this is being done all wrongly.

Tony Haluradivth
I notice that the Developer always gets those close involved in the proposal to come on here and try and discredit others who have genuine concerns. Bearing in mind the way Covid has swept through our Care Homes this last year I suspect they are the last place people of a certain age wish to find themselves in and caring families the length and breadth of our nation have possibly been rueing the day their elderley folk went into such institutions.

Mo Jamil
Geoff, you and your other nimbyist comrades are sore losers. Common sense and the law prevailed in this case. You will see an award winning much needed state of the art care home going up soon. Book your place fast and best of luck with your next anti development campaign.