Decision due on Handforth park and ride scheme 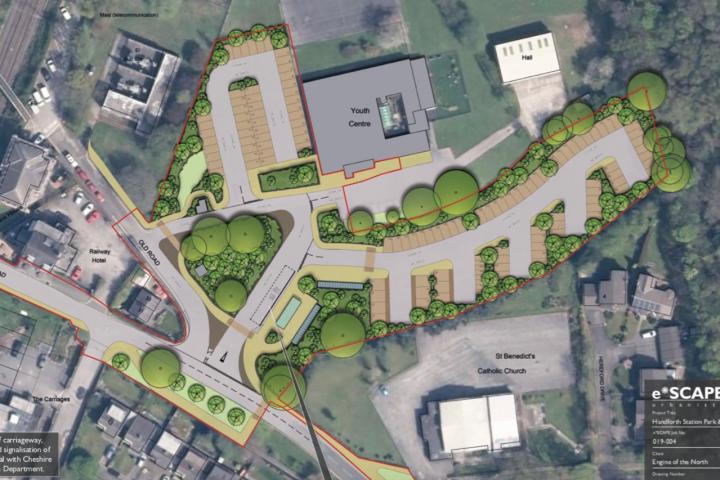 Cheshire East Council plans develop a park and ride scheme for Handforth will be considered by the Northern Planning Committee next week.

The Council says the primary aim of the scheme is to create a transport hub close to the railway station which will be used as an interchange between buses arriving from and departing to the proposed Garden Village at Handforth and scheduled railway services at the station.

The proposed scheme will also provide car parking, close to the station to ensure the development of the Garden Village does not exacerbate the parking congestion in and around the village centre.

Their outline application covers an area of 1.086 ha located on a small paddock of rough grassland which sits between St Benedict's Roman Catholic Church and Handforth Youth Centre, along with a small area of parking and grass to the west of the Youth Centre. Both areas of land are owned by Cheshire East Council.

It will provide a bus turning circle and shelter, 50 parking spaces required by the Garden Village, an additional 65 parking spaces for users of the station and village shops (funding of which is still to be determined) and 10 parking spaces suitable for disabled users.

It will also include secure locker parking for 36 bicycles, 8 motorbike parking bays, new pedestrian crossing points and resurfacing of footways.

In addition to retaining the access off Old Road, the proposal is to create a new access off Station Road which would require a number of trees to be removed.

Handforth Parish Council raised no objections to the application in principle, however they did strongly object to the singling of the carriageway over Station Road.

A number of comments have been received, some in support, some against and others raising specific issues associated with the development including concerns about narrowing the carriageway over the railway bridge, the need for bicycle lockers, car park management and height restrictions.

Additionally St Benedict's Church raised concerns about people parking in their car park ad the Scouts were concerned about safeguarding and the need for secure fencing.

The planning officer is recommending the Northern Planning Committee approve the plans, which can be viewed on the planning portal by searching for reference 20/2211M, at their meeting on Wednesday 13th January.

Tim Royle
There have been many justified objections to this ridiculous scheme... I do hope it gets rejected and we can all carry on as normal... hardly anybody uses the car park across the road as it is so why make it bigger and spend a fortune ruining the green landscape and causing traffic congestion by narrowing the road.
It’s not broke, so don’t fix it....

Simon Worthington
I recall that a station was to be part of the "garden village". It will be necessary for all the kids to get to the then too small high school.

Geoff Ferguson
Is this scheme required, will there be a demand for parking ?

I attended a meeting on the new "garden village" some time ago, this may be ridiculous but we were told something along the lines of
The 1500 houses in new garden village will have no impact whatsoever on traffic on the Wilmslow Handforth Bypass, although there will be another roundabout created.
A car park will be built near St Benedicts to that the villagers can walk, cycle,catch a bus or perhaps drive to the station , where they can catch a train.

Prior to last March the trains could not accommodate those already wishing to use this service, the carriages were constanly standing room only on commuting trains.

Considering where we are now, is there an actual need for this scheme or is it just box ticking for the garden village planning proposal

Pete Taylor
I have to admit that I don't understand this proposal; under a conventional "Park and Ride" motorists park outside town at a purpose built car park and are bussed into the town/city centre. As far as I can see this scheme involves simply building some car parking spaces in the town centre... a drive and park, no?
If folks living in the new housing estate are expected to get on a bus to the station, that's just a "ride", no parking involved.
Can anyone help me, please?

Henry Mott
This should be approved as it should advertise and encourage people to travel by train into various CBD’s. However, I would add the following. EV charging stations. Two Separate car parks, one accessing handforth dean for garden village and people coming up the A34. The other for people from surrounds of Handforth and dean row. The facility should also drive higher frequency of trains at peak times and of course access for all. I don’t think this should be seen as just a car park, but a driving force behind a better station etc.

Geoff Ferguson
The problem is that Network Rail are unlikely to improve the station facilities in the near future, in addition the train operators will not be increasing the frequency or capacity of trains.
Before March last year the commuting trains were standing room only by the time they got to Handforth, which shows the demand is there but not the ability to meet it. The phrase "build it and they will come" does not apply in this case, making the "garden village" just a field of dreams
Unfortunatly developers are allowed to incorporate public transport in their imaginative applications, however , as we all know who live in the area , anything regarding public transport is just that, a figment of their imagination to enable the public transport box to be ticked.