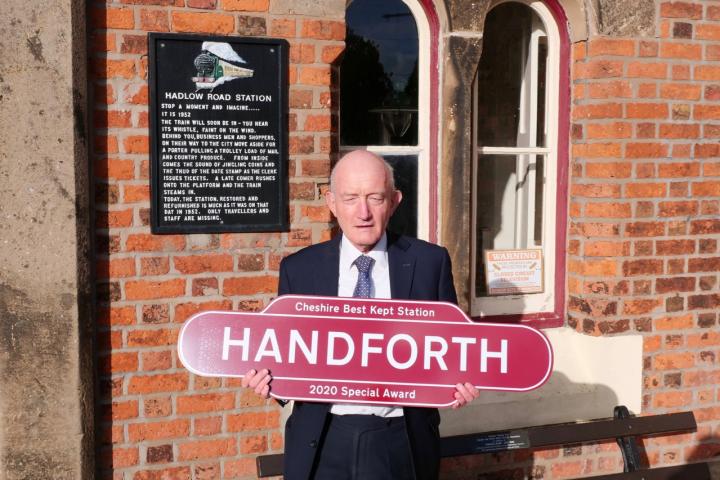 The 30 minute video, which was launched on YouTube on Tuesday 24th November 2020 was filmed at Hadlow Road, a preserved former Cheshire station now on the Wirral Way, 18 awards were made with 10 commendations.

Other stations that won awards on the Manchester to Crewe line via Stockport and Wilmslow included Chelford, Goostrey, Heaton Chapel and Holmes Chapel.

Handforth station's award was to celebrate the Friends of Handforth Station's achieving step free access to their platforms after 20 years of campaigning. £2.7m will now be spent on two new lifts from the booking office to the platforms.

Mike Bishop, President of the FoHS said "We were delighted to receive this award. This competition is unique: Cheshire is the only county in the UK to recognise excellence in its railway stations in this way. It is Handforth's 17th Cheshire Best Kept Station award during the 18 years this competition has been celebrating train stations in Cheshire. The only year Handforth did not receive an award was when the line and the station were closed for modernisation.

"This award is a testimonial to the ongoing commitment of so many Friends of the station and to the many groups who have worked with us over the years. 2021 marks the 25th anniversary of the Friends of Handforth Station. As the planned installation of lifts gets underway, we look forward to an exciting year working with artists and many groups and schools to make an even more welcoming gateway to Handforth."

On introducing the Awards, Jools Townsend, the Chief Executive of Community Rail Network said: "The awards are all about recognising the huge amount of work, passion and enthusiasm that you all put into your stations. "

"All of this is doubly important at the moment as we come through this great challenge we are facing through the pandemic as we are seeking to help our communities and railway to recover and build back better."

Other stations that won awards on the Manchester to Crewe line via Stockport and Wilmslow included Chelford, Goostrey, Heaton Chapel and Holmes Chapel.