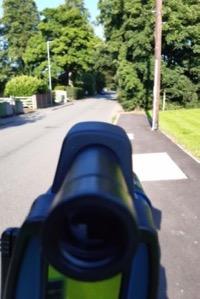 Police reported a 'new speeding record' of 55mph on Prestbury Road made by a motorbike heading out of Wilmslow on Saturday, 15th August.

As a result the motorcylist will receive six points on their license and a fine.

Graham Steel
Well-reported. As a cyclist, pedestrian and motorist I see many instances of speeding every day. I know what it feels like to be a pedestrian on a narrow pavement, or a cyclist where the motorist does not give enough room when overtaking, or a motorist where the person behind me just wants to get past. I doubt there will be any reduction in speeding unless and until motorists and motorcyclists sense a real risk of incurring a penalty.

Simon Worthington
This is NOT an accident blackspot and this operation is purely for the purpose of raising cash. For those in any doubt about how these operations should be organised and run download and read:
The Association of Chief Police Officers Code of Practice for Operational Use of Road Policing Enforcement Technology (ACPO COP).
Before the keyboard warriors get busy I fully support the use of speed detection devices where necessary and the rules are followed correctly.

Wayne Jaffe
Too many motorists and motorcyclists think the speed limit signs don't apply to them. Despite warning signs and speed alert signs, they are routinely ignored. It is only good fortune that more accidents don't happen. In the meantime let's hope the income generated for the council is not squandered.

Lynne Prescott
Simon... and for the purposes of making our roads safer - after all they wouldn't make money if everyone was driving at or around the prescribed speed limit would they?

David Smith
Simon Worthington:
Honestly, do you think for ONE microsecond that anyone reading your comment about 'raising cash' shares your sentiment?
Let's just for a moment assume that you are correct. The police have identified this stretch of road as being somewhere that they can set up a speed camera and record lots of road users exceeding the speed limit [breaking the rules]. So many in fact that the ‘revenue or cash’ generated by this exercise far exceeds the cost of police time, equipment and subsequent processing of the fines as far as actually getting the money in a ‘bank account’.
Well so what? All the offenders have broken the law on this stretch of road on the same day and in the same conditions and as such are treated differently from all the other road users who have not.
I have said this before - so here it is again for those like you.
When we pass our driving test we are in effect applying to join a club. The club rules are basically what are laid down in the Highway Code and any legal requirements required of road users - BY LAW.
A condition of passing your test and being allowed on the road [join the club] is that you know what is in the Highway Code and abide by these ‘club rules’. As in any club if you don’t wish to follow the rules you may be punished by being reprimanded, fined, having your membership suspended or even terminated.
The same conditions apply to the ‘Highways Club’. The rules [Highway Code etc] apply to all members, in all circumstances and locations. Part of the punishment for breaking the club rules is a fine that depends on the severity and disrespect for the rules, with persistent offenders eventually receiving a higher level of punishment which could lead to membership termination. It all depends on the attitude and behaviour of the club member and if they still want to remain a member they must appreciate that the club rules apply equally to all members at all times with no exceptions and in all locations.
If, as you reckon, this location is not an accident black spot - well, it could be that having a speed limit there is the very reason that it ISN'T one. If you wish to disagree and have the speed limit changed then I am sure there is a process both legal and constitutional for this. Since you will no doubt be in a minority for a change of the 'club rules' for this location I think the only way you might succeed would be to fund this process yourself. In which case I wish you good luck in a waste of your time and money, which I hope, will be reflected in your final bill for the time spent by various officials and public resources.
Please feel free to come back with your side of the argument/discussion so all the other club members can see what sort of member is in our midst!

Vince Chadwick
Just as a point of interest, the revenue from speeding fines does not go directly to the police (except for funding speed awareness courses) or to the local authority - it goes to the Government's 'consolidated fund', as does all tax revenue unless parliament decrees otherwise.