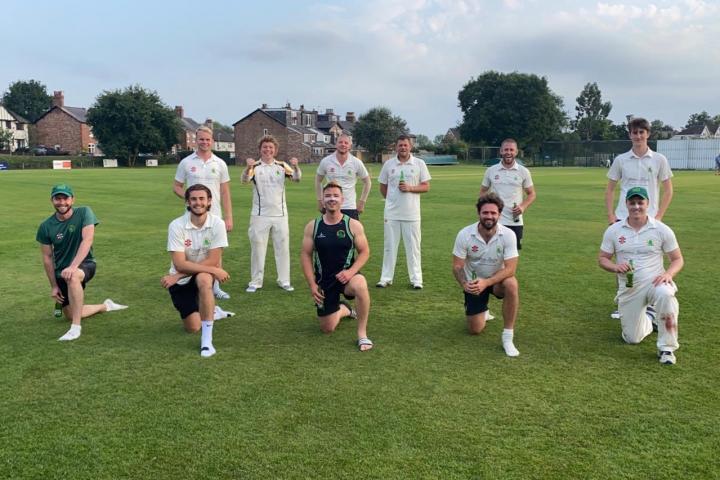 On Sunday afternoon Lindow 1st XI produced a performance that will live long in the memory as they chased down a big total against Premier League Toft in front of an even bigger crowd at Upcast Lane. Lindow now progress in the Cheshire Cup with a trip to Widnes for a place in the semi-final.

Sunday's result seemed even more unlikely as the day before they slipped to their first league defeat of the season in a below par showing at Stockport Georgians. Knowing that Toft would provide an even tougher challenge, they returned to the training nets on Saturday night and came out on Sunday ready to do the club proud.

Having won the toss skipper Alex Matthews elected to bowl and early wickets for Ryan O'Brien and Max Law put Lindow in a strong position. Lindow continued to bowl and field well, but Tom Forster showed his class with an unbeaten century, guiding Toft to 237-5 off their 40 overs. Alex Matthews, Robin Broom and Mark Farrell the other Lindow wicket takers.

In response, Rob Herriott gave the home side early momentum with a quick 27, but it was the 89 run partnership between Pat Christys and Robin Broom (65) that set the foundation for the chase. With these two out it was Max Law (75) and Alex Matthews (35*) who led the charge to victory. The home crowd got louder with every boundary, engrossed in a contest that could go either way from two sides giving everything. In the end it was Lindow's day, winning the game by 4 wickets with three overs to spare.

In a season that could easily have gone unnoticed, this was a special day for Lindow. Winning against high-class opposition at the recently re-opened Upcast Lane with the local community urging them to victory. A tough test awaits with a trip to Premier League Widnes in the Quarter-Final, but don't write-off this Lindow team causing another shock result!