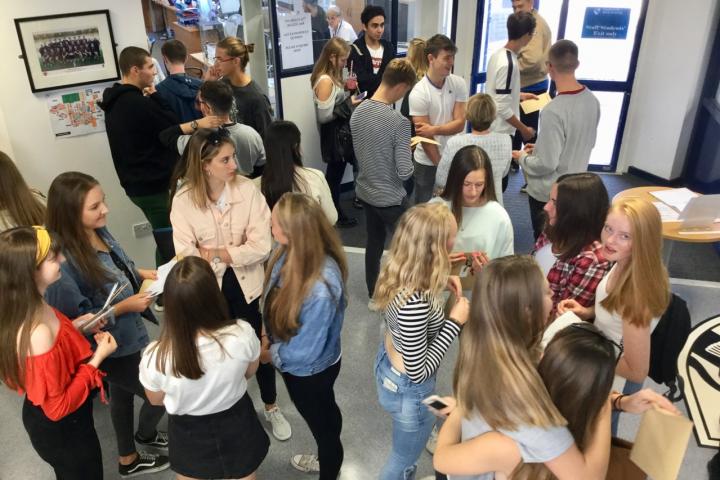 A-Level students in Cheshire East have once again chalked up impressive results that are above the national average. This is the second year of the new A-level and AS level qualifications being taken following the phasing in of revised syllabuses.

The borough's 1,701 sixth form students received their results on Thursday, 16th August, and they have again achieved a provisional pass rate of 98.8 per cent, which is above the national rate of 97.6 per cent.

The further breakdown of grades shows that the proportion of students achieving grades A* to A was 26.5 per cent and over half - 54.1 per cent - achieved an A* to B grade.

Councillor Jos Saunders, cabinet member for children and families, said: "This year's exam results, once again, are extremely impressive and I congratulate all the sixth-formers on their achievements.

"To continue to perform as an authority at the highest level year after year is a real credit to our schools and reflects the commitment from everyone to maintain such high standards. Our learners have shown great drive to achieve the highest grades possible and maximise their potential. I am extremely pleased to join them by celebrating the continued trend of improvement across the borough.

"I would also like to offer my sincere thanks to parents, teachers, school staff and governors for all their hard work and dedication. It will have been an anxious time for many students and their families as they await the result of years of hard work. Having that strong support network makes such a positive difference to the sixth formers.

"I wish our young people all the very best for the future, whether they are continuing their studies into further or higher education, apprenticeships or putting their foot on the first rung of the ladder in the work place - good luck!"