Cinema chain confirms Wilmslow venue not an option for them 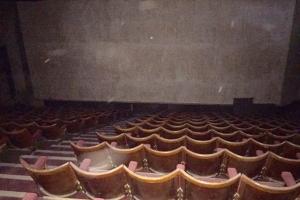 As reported on wilmslow.co.uk earlier this week, Wilmslow Town Council is exploring the options for turning the Rex building back into a cinema as well as an arts and community space.

Following the recent closure of Multiyork, local residents have been calling for the cinema to be brought back to life and the landlord has confirmed they are looking for a new tenant and are happy to consider the former cinema, where the 330 seats are still intact (see photo), being utilised as a community arts led space.

Wilmslow Town Council has agreed to enter into discussions with resident's groups, potential commercial partners and property agents regarding The Rex building and its potential as a cinema, arts and community space.

In the meantime, Wilmslow resident Khumi Burton contacted the Curzon Group to bring the potential opportunity at The Rex to their attention.

Curzon currently operates 12 venues across the country, including one in Knutsford which it opened in 2013 following a £170,000 refurbishment.

Unfortunately the company has confirmed that due to plans to refurbish and expand some of their existing cinemas, including the Knutsford venue, they would not be in a position to consider opening one in Wilmslow.

Robert Kenny, Director of Cinema Development at Curzon, said "Thank you for your recent communication bringing to our attention a potential cinema in Wilmslow.

"We already have a plan to invest a substantial amount of finance into improving our existing cinema in Knutsford this summer and because of this would be unable to pursue the Wilmslow opportunity."

Would you like to see The Rex building restored as a cinema and arts complex? Please share your views and ideas via the comment box below.

Neil Matthews
Maybe get these guys interested - their cinemas are a great experience and part of the community not just a place to watch a film.

Angela McPake
We were aware of the Curzon’s position before our meeting last Monday.

There are a number of conversations going on with other cinema companies who have expressed interest in working with us, but it is still early days in terms of having a firm commitment.

Sally Hoare
It would be wonderful if we could get a cinema here again. It could be a viable option if it could be used for some local theatre groups, choirs etc. as well.

Howard Piltz
Perhaps somebody with legal and/or commercial expertise could set up a legal entity or trust to take on the lease and organise a crowd-funding exercise to give it some capital. The Curzon might take her n the management.

Sophie Taylor
In case this article alarms people, there was never any expectation that The Curzon would take on The Rex.

Terry Roeves
Angela - where can u find the extra parking for matinees? Say 40 cars, like Knutsford. Would anyone base a business plan to fill 150 seats without easy matinee parking? A very special property tax deal with CEC and the Landlord would help of course.
Already we have retail and surgery staff shuffling cars to avoid being ticketed. It’s not getting easier as CEC swamp Wilmslow with approved housing plans.
KR Terry

Angela McPake
Hi Terry,
A very valid point and as parking is such a major issue in the town, I don’t really want to change a string of conversation about a possible cinema to one about parking.

Day time parking is an issue, but short term parking is easier to find ( which is what cinema goers would need) than all- day parking. And positively, the large car parks behind the Rex are hugely positive for anyone coming in for an evening showing. Angela

Another alternative would be the vacant Energie leisure premises here on Summerfields Village. It is just off the A34 and a few miles out of Wilmslow town centre.

The building is in good condition, in the middle of an existing and growing residential area; it has lots of on-site free parking (day and night) and of course, it comes already designated for recreation and leisure use by Cheshire East

It offers a huge upstairs area which could be adapted to a cinema / arts / community / concert space accessible by lift; keep the pool as a community asset & maybe re-open & let the empty retail units to small start up units.

There's even a cafe area, a smart reception and three sizeable studio rooms which could become exercise : keep fit space.

Over the road there's a welcoming family friendly bar & restaurant which is supplemented by two great cafes / takeaways. Ideal for meal times.

Lidl Gmbh would stay where they are. Maybe moving their store room into the roof to create ground floor space for the wider aisles, the bigger staff room, the customer loos and the packing areas and the more 'bakery lines'.

DELETED ACCOUNT
Martin - as one of the Councillors said at Northern Planning - that they felt that "the community was losing something but not getting anything back".

Another option, since Cheshire East regard this area as having good transport links and that people can get easily to Wilmslow for the Leisure Centre - is to designate this area as parking for Wilmslow Town Centre for the Rex!

Paul Roue
Ahh but Jackie, you see you've forgotten something !

The local community is getting the modular building with the metal mono pitch roof [to 'contrast with all the surrounding brick & tile' . . . ] the wider aisles to shop the same number of products (of course) the public lavatories, the knowledge that there's a bigger staff room and the err...s ' more bakery lines '

Roger Goddard
They should make contact with Zefirellis in Ambleside who manage to run 5 small screens and two excellent veggie restaurants in a small town with poor parking. Independent cinema is alive and well there and, believe it or not, locals and visitors can walk there!

Jon Armstrong
330 seats is not a small screen though. Isn't that the problem... Most small independent cinemas survive with small screens, rather than multiplex sized screens without multiplex choice. And if you would split the Rex into smaller screens the cost shoots up.

And don't use the "w" word in these parts Roger! For all the complaints in these parts about parking and traffic, they generally don't like the idea of not using their cars! Personally I don't think we'd have much of a parking or traffic problem in Wilmslow if the many people who are perfectly capable of walking relatively short distances actually did so.

Phil Gaskell
hi ,i would love to see it as a arts center with lots of talented people in the wilmslow area there are lots of reasons use itb i sing with a choral group
lindow singers and this would be a perfect place for us to hold our concerts
from time to time ,its important for a ever expanding town like wilmslow to have a good community based attitude which can only be good for the center im sure if Cheshire east looked into it it could be a great investment
for them and wilmslow

John Simpson
Roger , even better than Zeffirellis is the magnificent Royaty cinema in Bowness . I was talking to the Owner ( Charles Morris ) when the Rex closed , and he knew it well as he had worked there as a holiday relief in his youth . He also runs5 other traditional cinemas in the north.
The Royalty still has a stalls and circle in the main auditorium (400 seats)
he could make more by converting that into 2 screens , but he is a cinema buff and says that would spoil it - but he has added 2 smaller screens behind the main screen and in the old lounge upstairs. They have also installed a restored Wurlitzer organ from Cleveland Ohio .
He said when the furniture store moved in the cinema could only have access from the back of the building , but that shouldn’t be a problem know.
.End of commercial!

Chris Wigley
We have somewhere closer than the Lake District and about the same distance as Knutsford that may be of help in running a cinema. The Plaza at Stockport is a magnificent Art Deco cinema offer film and live theatre as well as broadcast of live national theatres and international opera.

Dave Billington
The cinema is a great idea. But failing that an indoor food market similar to the one in Altrincham would be fantastic. It would generate a lot of trade for the town, but more importantly give it some much need character which, apart from the artisan market, is seriously lacking in Wilmslow.

Angela Ferguson
I absolutely support the Rex Cinema reopening, probably with 2 screens and maybe showing occasional Arthouse movies. I also agree it would be great to have it double as an Arts centre with exhibitions, classes and specialist Art shop. This could definitely be a community hub and would boost footfall in Wilmslow plus extra restaurant trade. Also aesthetically the lovely Art Deco building could be seen again instead of the usual commercial signage.
Maybe all those developers who have been building hundreds of new homes in Wilmslow could contribute to this entertainment initiative ??