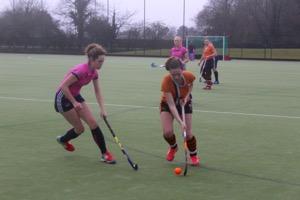 Wilmslow are going through a bad spell of injuries and a thin squad was always going to struggle against a Preston side battling against relegation.

The visitors opened the scoring from a long corner and from a counter attack went 2-0 up. The ever reliable Ben James and Andy Hunt increased the pressure in midfield and with half time approaching forced a number of penalty corners. Eventually Robin Cooper stepped up from full back and sent in a powerful drag flick to reduce the arrears.

In the second half Preston picked a few holes in the Wilmslow defence but Si Pickering was in imperious form in goal.

Pete Hallinan started to cause the Preston defence problems and eventually from another penalty corner Robin Cooper repeated his earlier effort to level the scores. From then on despite the visitors greater need for the points, the game became a stalemate. At the end all agreed on a fair scoreline.

Wilmslow Mens 2nds kept up their winning run with a 3-1 victory over Neston 3rds. Mens 3rds beat Lymm 2nd 3-1 to open up a 6point gap at the top of the table. 4ths squeezed past a skilful Bowdon side 4-3 to stay second but goalie-less 5th team went down 7-1 to Bowdon 7th

With the cancellation of the 1st team match the 2nds had chance to impress the home supporters. Having won all 6 previous games since the Christmas break confidence was high. That said, no game in this league is easy and Wilmslow knew that they must be at their best to continue the good run of form.

Wilmslow started the game well, applying pressure to Neston from the first whistle and the first 10 minutes was predominantly played in the visitors half. This early pressure paid off with a goal from Di Law who found space near the back post and remained calm enough to hook the ball around the keeper, putting Wilmslow 1 – 0 up.

Sustained pressure and some slick passing from Wilmslow's midfield found some gaps in Neston's defence and allowed Wilmslow's attacking unit to win several short corners. Tracy Moir and Jen Nurmi both came close with powerful strikes from the Top of the D, But it was the captain Jess Finney who made it 2 – 0 jumping on a loose ball in the D and slapping it into the net.

Wilmslow's Tracy Moir and Fiona Campbell continued to control the game with powerful passing, and some clever play in the middle found the ball shipped out wide to Cat Vitale. With a trade mark run, man of the match Cat Vitale used her pace and skill to leave Neston's left back in her wake and picked out a great pass to Rachel Payne. Picking up the ball in just outside Neston's D Rachel Payne did what she does best and carried the ball at pace into Neston's D, she then picked out a square ball to Becca Healey who was in the right the right place at the right time and megged the keeper to make it 3 – 0.

Neston came out in the second half swinging and applied some pressure to Wilmslow, pinning the home team back for a sustained period. Wilmslow's back four remained calm and some strong tackling from Jo Swan, Hannah Claire, Hayley Bull and Nicole Mellor withstood Neston's attack. Wilmslow began the get a handle on the game once again and started moving the ball well from the back, creating space for Wilmslow's wide players of Jacinta Kynaston, Becca Healey and Cat Vitale to show how dangerous they can be. Emma Hayward also shone in the midfield and opened up space for Wilmslow forwards to add to the score sheet. Di Law came close hitting the post and Jen Nurmi was unlucky not to get on the score sheet. Rachel Payne also remained a constant threat with calving runs into the D.

Wilmslow ended the game very strongly but Neston were resolute in defence and held the home team at bay to keep the score at 3 – 0. Wilmslow now go into a week's break with their next game being away against Golbourne.

Man of the match performance from Cat Vitale

Neston had some measure of revenge when their 3rds beat Wilmslow 3rds 1-0 at Neston.