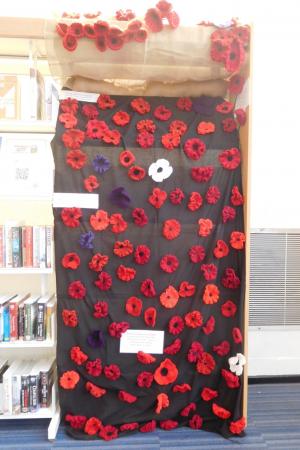 A group of local knitters have created a display of crocheted poppies which can currently be viewed in Wilmslow Library.

Sue Hill explained "The idea for the poppy display actually came to me while on holiday at Easter. There was an Knit and Natter group on the ship and as I got talking to the group I realised that we as a group could support a community project as some of my fellow travellers were doing.

"Poppies seemed a good idea to involve all abilities and there didn't need to be any uniformity or tension concerns. So our knitters in Wilmslow were approached and were enthusiastic . The poppies use a quick pattern so when we are nattering too we can get a few done! They don't take up much wool so the odd balls can be used up."

The Knit & Natter group, which has been going for about three years and now has 25 regular members, have produced 139 poppies in a variety of colours.

Sue added "We are all aware of the red poppies remembering those who have fallen in wars but alongside the human loss are the brave animals who are remembered through the purple poppies . This was adopted in 2006. These animal victims during human conflict have been used as messengers, for detection, scouting and rescue and as beasts of burden and on the front line. And animals that come to mind include Joey in Warhorse and Jack the Airedale terrier, an unsung hero of the trenches, plus many more.

"Likewise there are many who wish for peace and the white poppies reflect their thoughts."

Knit & Natter are an active group of knitters who meet weekly at Unico Lounge on Grove Street. They knit their own projects as well as knitting for local and national charities - including providing socks and blankets for a hospice in Blackpool, knitted nurse dolls for New Life and other items for Knit for Peace.

The group is currently knitting mini stockings for the Christmas Tree Festival at St Bartholomew's and have already made 127.

Debi Whitney
What a wonderful idea, and I have learnt something new in respect of the purple poppies and if I can obtain one I would certainly wear it.

Well done ladies, for all that you do and help and keep up the good work.