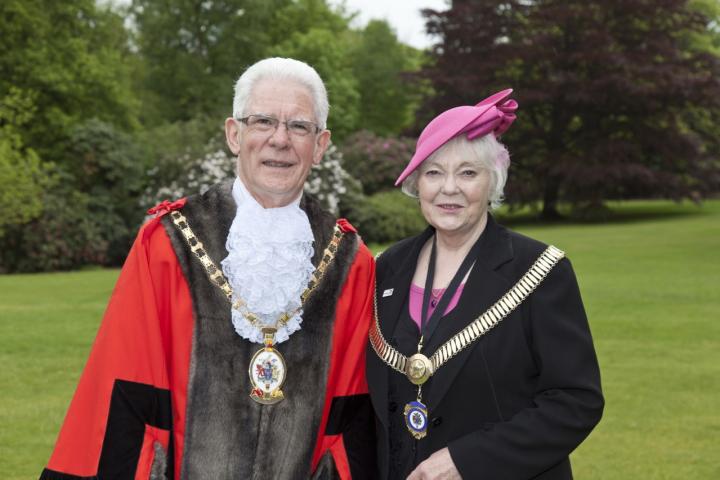 He was a Cheshire county councillor for 12 years, where he was made an honorary alderman, a Crewe and Nantwich Borough councillor for 13 years and a member of Cheshire East Council since it began in 2009.

A keen cyclist, he was a staunch supporter of the Tour of Britain, staged in the borough last year and reveals he was given a racing bike for his 40th birthday.

Now 71, Councillor Moran still cycles for leisure purposes but must now put his bike away while he fulfils a busy diary of events over the next 12 months.

His two charities for his year of office will be Target Ovarian Cancer and the Leighton Hospital Prostate Cancer Support Group.

The new mayor has invited close friend, Mrs. Carole Thomas, to be his mayoress.

Looking ahead to his year of civic duties, Councillor Moran said: "If I can achieve only half of what Olivia has done as the present mayor, then I will feel that I have done a good job.

"I am very proud to have been asked to be the new mayor of the borough. I think it is important to continue the tradition of mayor and I look forward to representing the borough and our residents wherever I am invited to attend."

Outgoing mayor Olivia Hunter (High Legh) said: "I wish Arthur well. It has been a magnificent year for me and the highlight has been all the wonderful people I have met. Meeting our school children at various events was great fun because they were always fascinated to learn about the role of the mayor and the regalia, such as the mace, that goes with it."

During her year of office, Councillor Hunter raised more than £11,000 for her two charities – The Christie and Cheshire Young Carers – a new record for a Cheshire East mayor.

Councillor Lesley Smetham (Gawsworth), will take on the role of deputy mayor, and will assume the role of mayor in 2018.

Nick Jones
Fantastic achievement .. he would make a great PCC ( or Deputy !! ) Congratulations !

DELETED ACCOUNT
Congratulations Lesley Smetham too. One of the Councillors who substituted at the Strategic Planning Board who passed the Adlington Road development.