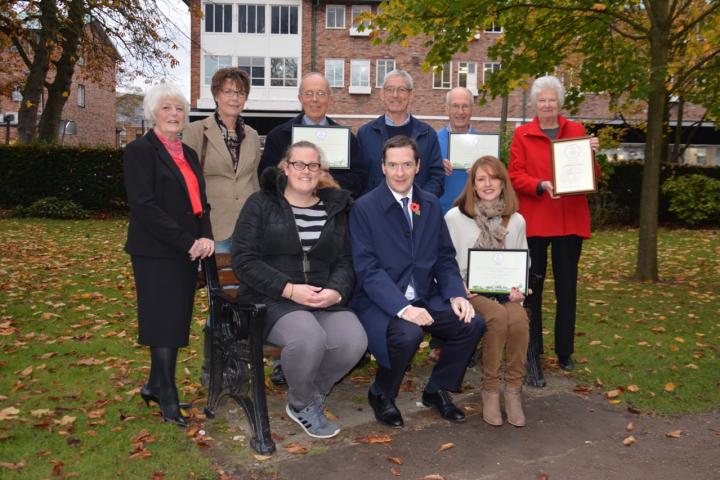 The first grant they approved was for £900 from Wilmslow Library to fund a variety of children's events and incentives to support the 2017 Summer Reading Challenge which is a national scheme to encourage school children to keep reading over the summer holidays. The grant is to cover author or illustrator visit, story and performer visit, two animal handling events, story and craft along with gift incentives and prizes for those who complete the challenge.

Councillor David Pincombe said "Last year Wilmslow Town Council provided £1000 for a similar Summer Reading Challenge, which was extremely well attended by some 670 Wilmslow children, compared with 428 in 2015 and 231 the year before.

"Based on the popularity of the Summer Reading Challenge and the benefits it brings to Wilmslow's children the Finance Committee propose that the grant of £900 be paid."

Wilmslow Partnership, a collection of Wilmslow groups who come together to deliver the town's entry into the North West in Bloom competition, applied for £1500 to fund Wilmslow In Bloom.

As in previous years, £750 was requested to cover the entry fee, publicity materials, buffet lunch for the judges and voluntary groups along with six tickets for the awards ceremony. An additional £750 has been requested this year to fund a piece of artwork to complement the theme of the competition.

Councillor David Pincombe explained "The Finance Committee decided to consider this request in two parts and agreed that the £750 for the entry and judging should be put forward to full council for consideration, but the second part for the artwork to complement the Wilmslow in Bloom theme should be ring fenced and only considered for payment when the council have full knowledge of what is being intended and a breakdown of costs is submitted."

He added "The Finance Committee would like to put on record the appreciation of the Town Council for the efforts of all the voluntary groups associated with the Wilmslow in Bloom project and the efforts undertaken each year to brighten up the town."

The Rotary Club of Wilmslow Dean were awarded £400 to support their charity Swimathon which is scheduled to take place on March 25th and 1st April at Wilmslow Leisure Centre. The total cost of the event is £800 and to date 20 teams have taken up the challenge. The grant will cover the hire of the pool and other ancillary costs.

The East Cheshire Hospice Wilmslow Support Group applied for £750 to go towards covering advertising costs, a treasure hunt and medals for their Beating the Bounds sponsored walk around Wilmslow on Sunday, 21st May.

Councillor David Pincombe said "Although the charity is an excellent one which will hopefully make a lot of money for East Cheshire Hospice and become an annual event in the calendar we felt that the full amount of £750 requested, which included a variety of costs associated with printing and banners plus engraving of medals at a cost of £200, needed to be reviewed further."

Wilmslow Town Council agreed to provide a grant of £500 as a one off payment to assist the set up costs for the Beating the Bounds sponsored walk.

The final grant which was approved was from the Wilmslow Clean Team for a sun of £1,162.50 to cover the costs of replacing a damaged storage bunker, pay public liability insurance, maintain a website and advertising the Spring Clean Week.

Councillor David Pincombe said "The Finance Committee recognise the tremendous work carried out by the Clean Team, all unpaid on behalf of the Wilmslow community, with work covering a vast amount of the town in conditions that are not always pleasant."

Meanwhile an application from Dean Row Village Hall for £5000 towards replacing the roof of the 100 year old building was also considered. The Town Council suggested they approach the developers on the Bollin Park development with regard to community funding or materials, which to date has been unsuccessful. It was agreed that a sum of £2000 be ring fenced for this project and released for payment when they have received notification that other funds or sources have been identified.

Wilmslow Town Council also turned down one grant application. Age UK Men in Sheds applied for £2000 to assist with the maintenance of the Men in Sheds projects, which is managed by AgeUK.

The organisation has two sheds, one in Congleton and one in Macclesfield, which are designed to provide support for men over the age of 50 through encouraging the learning of new skills, improving knowledge of health issues and increasing confidence through social networking. When they asked about the number of Wilmslow residents who have used the service they were advised that 11 have.

Councillor David Pincombe explained "Although the Finance Committee believe the scheme to be an excellent one, it was felt that until we could see proof that it is of benefit to residents of Wilmslow (in greater numbers than has been advised) and that funding is being provided by other organisations who are in closer proximity to the sheds, we would reluctantly not wish to support the application at this time."

Pete Taylor
An interesting historic photograph (was it taken last November?): one current WTC Councillor, one former WTC Councillor, one current CEC Councillor (who tried to get onto WTC but failed) and an MP who has shamed not only his Constituency (particularly all those who voted for him)... the Conservative Party nationally and yet who might, at some future point, be seen by history to have derailed the Westminster gravy-train. We can only live in hope.

But as for the topical picture ! our now absent MP' and his cohorts are reminiscent
from a park bench scene in Lee Blessings play “ A Walk in the Woods” but instead of the central characters (a US and a Soviet arms negotiator ) who drafted their own breakthrough plan being rejected by their Govts.. It demonstrated how ‘opposites’ working together for a common purpose have a better chance of success. I suppose that’s where the analogy stops as the central characters in this scene are working to see what they can get away with ! Lyme Green, Silence on key issues ie why voted to remove green belt protection , Only having 6 jobs etc.