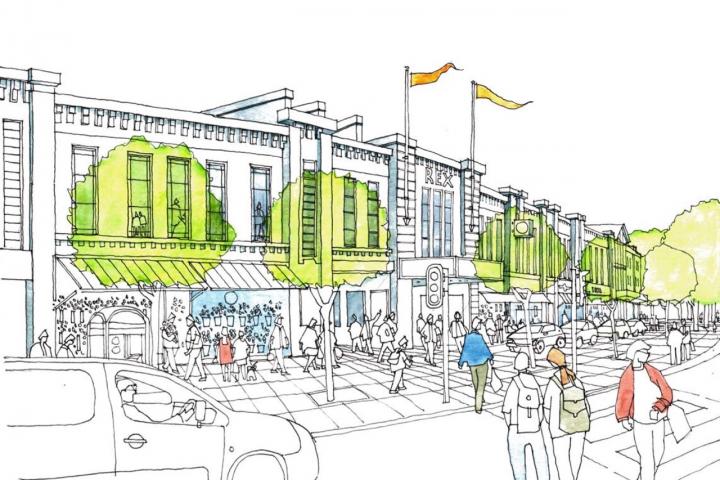 Residents of Wilmslow have voted to back their neighbourhood plan.

The plan was put to referendum on Thursday, 10th October, with 89% of people who voted saying 'Yes' Cheshire East Council should officially adopt the Wilmslow Neighbourhood Plan.

Brian Donohue, Chairman of the Wilmslow Neighbourhood Plan Group said "I am obviously delighted that the vote was in favour of the Neighbourhood Plan and that Wilmslow now has a local planning document in force which, among other advantages gives immediate extra protection to our green spaces and heritage areas such as Wilmslow Three Parks and and Lindow Moss.

"In addition it sets out a number of aspirations for the development of the town centre. These should act as a catalyst for ideas and investment which I am sure will be pursued by Wilmslow Town Council."

One other benefit is that Wilmslow will receive a larger share of monies to be paid out for local use from future housing planning applications (Community Infrastructure Levy) now it has a neighbourhood plan."

Brian added "It has been a great example of what can be achieved by a volunteer group which,over the three year period, has consulted and listened to the views and opinions of the residents of Wilmslow and translated these into the final document.

"I want to thank everybody who has participated and responded to the surveys but in particular to the Wilmslow Neighbourhood Plan Group members for their many hours of dedicated effort in producing the document and achieving the result and to Wilmslow Town Council which initiated the project and supported the group throughout."

Martin Watkins, Chairman Wilmslow Town Council, said "I would personally like to thank all of the volunteers who have spent much of the last 3 years working to bring together this excellent document, the enthusiasm and skill involved has been immense. Almost 90% of those who cast a vote were in favour of the content of a plan that will ensures that the Planning Authority have a statutory requirement to consider its content when dealing with all planning matters relating to Wilmslow.

"In addition the Plan will now help direct the future work of the Town Council and we look forward to continuing to work with volunteers ,the Principle Authority and other bodies in influencing the delivery of the Plan over the coming years. Finally I would like to thank those who voted and in doing so gave the plan the necessary mandate to shape the future of Wilmslow."

An independent group of Wilmslow residents have spent the past three years putting together The Wilmslow Neighbourhood Plan which consists of planning policies and aspirations on the development of the town. There are also policies on the natural and built environment, infrastructure, housing and employment and on the town centre core. Additionally, the plan identifies key sites which could be developed and specifies how and under what circumstances these developments would be supported.

The Wilmslow Neighbourhood Plan will become a planning policy document which is considered when determining planning applications in the town, alongside the Cheshire East Local Plan and national planning policies.

The plan can be viewed on the Wilmslow Neighbourhood Plan website.

Image: Artist's impression of how the area outside The Rex could be developed.

Or maybe there's too much democracy: I mean, council elections in early May, EU elections (somehow - because the EU is un-democratic, right?) in late May, and now this.

Maybe it was a bit rainy.

Maybe people just couldn't be bothered, because no-one listens. Or something.

Wayne Jaffe
Although I voted, the background information beforehand was not easily found. I understood the gist, that it was a good thing, but couldn't really explain the details, even after "googling". Glad it passed and this article does give useful information as to the benefits which would have been more useful beforehand and easily available.

David Jefferay
Congratulations to Brian and the neighbourhood plan group and thanks for the sterling work you have done. It's a very powerful document which will help the town get the right direction in the right places. Thanks also to the town council for facilitating it.

Pete Taylor
Well done and a big thanks to all involved in putting the Plan together.

Sally Hoare
I know some of the volunteers involved in preparing this plan and thank them very much for all their hard work.
However it was quite complex and a lot of people told me they were not voting as it was hard to say a simple yes or no, even if they did have time to read it in detail.
After the fallout from the last referendum I am not surprised it was a low turnout.

Clive Cooksey
Around 27000 never bothered to vote. Only 3109 said yes. It proves to the Blue Sky thinkers that we don't want them messing around with our town. We like it as it is thanks. What gets into the minds of these "experts`' who start saying we know whats good for you? No they don't! All I see them doing is greedily gobbling up all the green sites around here to build on. Soon there will be nothing unless its stopped. The lovely parkland at Monks Heath is currently being built on big time. Why? Because it was classified as a brownfield site. And that was because it formerly had some offices on it. Not an old factory that had left an ugly scar and it needed re claiming. What a con.

David Jefferay
Sally, The turnout was low but not massively low when you consider that our local elections are typically only about 30%. It was never going to be along the lines of 70% that you get for general elections.
Sandra, the policies do have to be adhered to. This is a statutory document which sits alongside and has the same legal status as the Cheshire East local plan, see https://www.gov.uk/guidance/neighbourhood-planning--2
It has to be used when making planning decisions. And then there is fact of the additional funding that the town gets because it has a neighborhood plan. I stand by my comment that it is a powerful document.

Keith Chapman
Whilst the turnout could have been higher only a simple majority was required, and the Neighbourhood Plan will work for the benefit of all Wilmslow residents whether they turned out on Thursday or not. If this plan had been in place before all the recent new building in Wilmslow better decisions would have been made. When future challenges to the town emerge in coming years the good principles laid down in terms of design and preservation of green spaces will help us to achieve the sustainable growth we all support.

Mark Russell
So using remoaners logic, 82.1% didnt vote, so we can assume they would have voted no. Why are the council saying its a yes vote?

Jonathan Follows
I had a look around, unscientifically and randomly, at other similar votes around the UK and although most of them managed to exceed 20% turnout, none of them topped 30%. All the others I looked at had 89% or more of those who did vote doing so in favour.

I think Sally Hoare is quite right, it's not simple to turn a complex document into something which can be answered by a yes/no vote. I read the documents and did research elsewhere and still couldn't make this meaningful to me and my vote, so I chose to join the majority in not voting. Some of the arguments I read convinced me away from my original inclination to vote against, essentially because I think the people responsible for the plan mean well and tried hard, but they ultimately failed to make it meaningful to me.

Barry Buxton
Less than 16% of the electorate voted in favour! Less than 3,500 people voted! How much did this referendum cost us?! How much per vote?

I'm not saying that the Plan is not useful, and I'm pleased that so much effort was put into creating it. But, let's get real when it comes to democracy and dispense with the 'niceties' in future. Just do it!

Clive Cooksey
Mr Chapman states "only a simple majority was needed! Romoaners take note re Brexit. What part of democracy do they not understand?

Mark Goldsmith
@Barry
A referendum is required by law to adopt a Neighbourhood Plan.

Therefore, it was a mandatory process for Wilmslow to go through if it wants the benefits of an NP.

Whether the government is right to insist on this public vote is a valid question though.