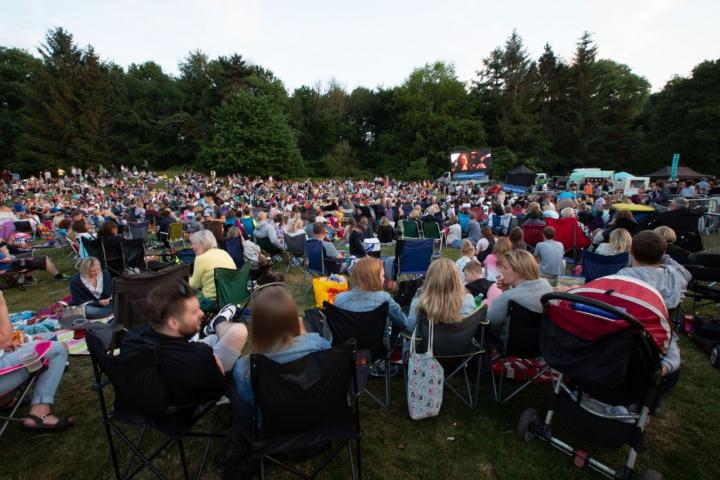 Following disappointing weather in June this year's Cinema on the Carrs is now going ahead on Saturday, 24th August.

Wilmslow Town Council first introduced the Cinema on the Carrs concept in 2015 when Mamma Mia proved hugely popular with the crowd, some in costume, singing and dancing throughout. Five years on and 'Here We Go Again'.

As in previous years the community event be free to attend, and allow friends, family and neighbours to gather and enjoy the films together. The event will start at noon when children's rides, entertainment and the food court will open.

The highlight of the afternoon will be the showing of 'The Incredibles' on the big screen at 2pm and also feature ongoing children's entertainment culminating in the annual Duck Race on the River Bollin, organised by the Girl Guides, after the conclusion of the afternoon film.

During the build-up to the evening feature they will be showing 'Hungarian Rhapsody, Queen, Live in Budapest' which features Queen in a concert from their 1986 World tour, including a host of their best-known hits.

This will be followed by 'Mamma Mia Here We Go Again' which will be shown on the big screen as darkness falls. The evening's entertainment will start to build from 6pm when residents can enjoy the food court and music on the big screen prior to the film starting at 8pm.

Chairman Martin Watkins said "Last year's event was hugely supported and enjoyed, indeed the numbers attending last year has led us to needing to upgrade the sound system, the screen size and the layout for this year.

"One of the best things about Cinema on the Carrs every year is friends and neighbours getting together to have a great time. We can guarantee that those attending in 2019 will have a thoroughly enjoyable day however what we can't guarantee is the weather so I would encourage all to support the event, come rain or shine, whilst the Council prays for the latter."

Tags:
Cinema on the Carrs

Marc Staples
Great but surely a duck race in the river Bollin where there has been several reported bouts of vomiting from the water and even a sick dog is not such a great idea !!!
Girl guides and loads of children in polluted water is a recipe for disaster in my opinion

John Mills
The Girl Guides leaders are responsible adults and the Duck Race is organised with due care and attention. For Marc’s benefit he should be aware that no children enter the water at any time during a Duck Race and the ducks will not get sick as plastic ducks are used!

Helen Hayes
Were Opera Glasses provided to see the screen?

A marvellous idea though!