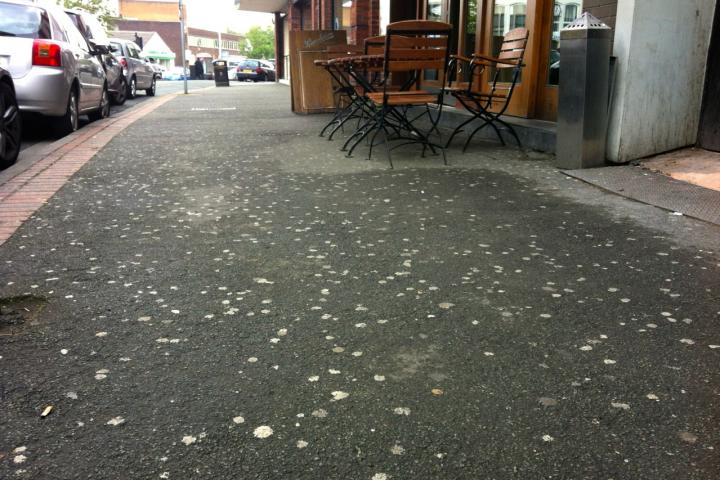 Wilmslow Town Council has investigated the costs of having chewing gun removed from Grove Street and along the pavement outside the shop frontages from Costa Coffee to Hoopers on Alderley Road.

In order to clean these pavements the companies would need to work at night and estimate the work would take 5 to 6 nights to complete. They would also need to clean the entire pavements, rather than just the sections covered in chewing gum.

Wilmslow Town Council discussed these proposals at this month's meeting, where it was noted that if they went ahead this project would use up about half of their entire maintenance budget for the year.

Town Clerk Matthew Jackson commented "My concern is that it seems an awful lot of money for something which I suspect would be as bad again in 12 months times.The gum is on the Alderley Road site is not on particularly attractive pavement so when we actually remove it we're still going to be left with unattractive pavement.

"It is a little bit different on Grove Street but the reason why it's so expensive is that they have to do it at night because it is a rather noisy and messy operation and they have to do the all of the pavement, they cannot just do where the gum is otherwise you'll be left with patches."

Cllr Ruth McNulty added "My feeling is it is very expensive and too big a proportion of our maintenance budget."

Councillors decided to approach Cheshire East Council for match-funding for the work to be carried out on Grove Street and leave Alderley Road for now. They will revisit this issue at the next committee meeting.

What do you think about having the chewing gum removed from these two areas? Would you consider it money well spent, or not? Share your views via the comment box below.

Sally Handfield
No money not well spent when there are plenty of other problems in wilmslow the money could be used on. Seems a lot of money for something my husband could do in a day with a jet wash. Why not get the friends of wilmslow volunteers to do it if it's such a eyesore for the local residents?

Chris Hayes
No, I don't think it would be money well spent, as I agree it would soon be just as bad.
Didn't we have gum bins on the lamp-posts at one time? What happened to them?

Clive Cooksey
The people who have cafes and bars should be made to pay towards the clean up. They are the points where the uncaring spit out the rubbish before taking their fill at these places. Plus manufacturers of gum should have a tax on them to clean the mess up nationally. That tax could be passed onto the customer, and who would want to spit out "chuddy" if it costs £10 a packet!! They will stick it on the bedpost overnight instead.

Terry Roeves
I flagged this up last year, pointing out at the same time that our paving flag stones had been removed and replaced with cheap tarmac. I think it was about the time that Macc town hall and the square were renovated. Go and admire the flag stones and stone blocks they used. Must have cost a fortune.
One rule for us and one for them?
CEC have plenty of s106 money from Wilmslow unspent - send them a bill for putting back our stone flags.
I hope WTC can find a solution. We have some good Cllrs there who do care a great deal about our town, which is more than I can say about CEC.

Vince Chadwick
The chewing of gum looks distinctly bovine. But at least cows, when they chew the cud, do eventually swallow it and don't spit it out onto the ground.

Rehana Hindle
I think the bars should pay for the clean up, and perhaps get a reduction in the rates to offset the cleaning!

Simon Worthington
The gum bins lasted a few months before they broke or were full because no one bothered to empty them. The designer and installer was (and still is) an apprentice millionaire who received huge initial support followed by apathy. The amount of used gum is staggering and appears to collect in certain places - often where the hugely taxed smokers gather. The simple answer is a pollution tax applied to the product and spent on the clean up. Easy - more gum on the street more tax paid to clean it off.

Derek Stevens
Why worry about the cost of cleaning away chewing gum,travellers litter,and dog fouling.
Soon the council will have an extra £650,000 per annum of council tax they will gather just from the new residents living off Adlington Road, oh and that's not to mention the 'sweeteners'
That amount should cover the employment of a few extra hands to restore our town and byways

Nick Jones
A quick search on internet reveals one of the industrial machines used to remove gum can be bought for a couple of thousand pounds.....

I'm sure a salaried CEC employer could be used to 'paint the forth bridge' and keep going with this thankless task......... otherwise don't spend my taxes clearing up this mess...

Why not identify a few people spitting the gum out and get them to clean it up on a busy Saturday afternoon ...not that there's any chance of enforcing this... just something to chew over !!