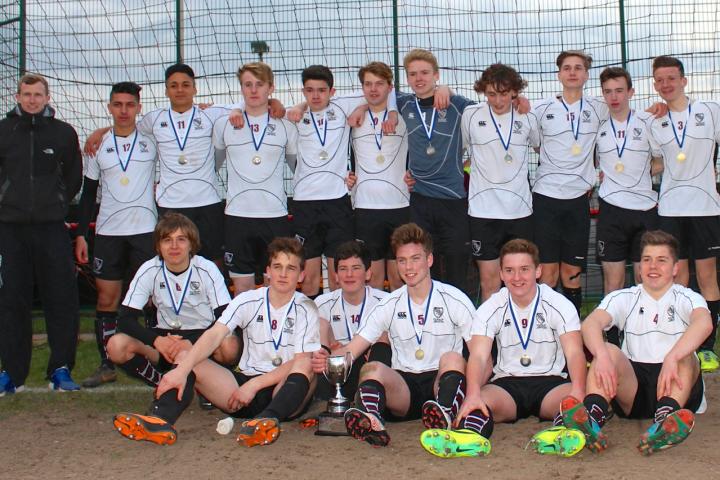 It's been quite some week for Wilmslow High School's U16 Football team, crowned Cheshire Champions and Macclesfield and District Champions on consecutive nights.

On Monday night, the boys travelled to Middlewich Football Club to contest the Cheshire Cup Final against Ellesmere Port Catholic High School. Having beaten Ruskin, Sandbach and Upton on their way to the final and losing only one game in all competitions this season, Wilmslow went into the game confident, but not complacent.

The game was played in cold, windy conditions, with Wilmslow playing into the elements in the first half. Wilmslow took a one – nil lead, through a neat finish from Reece Hubbard, but conceded a late penalty against the run of play and went into half time with the scores level.

With the wind at their backs, Wilmslow got the ball down and started to play some attractive football. Their swift passing game put the Ellesmere Port team under considerable pressure which told midway through the half when Reece Hubbard created a yard of space for himself doubling his personal tally and sending the Wilmslow team 2 – 1 up. Hubbard went on to complete his hat trick 10 minutes later and Belal Ahmad made the game safe bundling home following a goal mouth scramble. A disciplined, mature performance from the lads saw them crowned Cheshire Champions, retaining the trophy for the first time.

There was no respite for the Wilmslow squad with their Macclesfield and District Cup Final against Poynton scheduled for the following evening, albeit on home soil. A nervy performance played under testing conditions, saw the Wilmslow side spurn a number of chances in normal time. A glancing Nathan Johnson header was all that separated the two sides after extra time. A tired yet elated Wilmslow side completed the double, rounding off a hugely successful season.