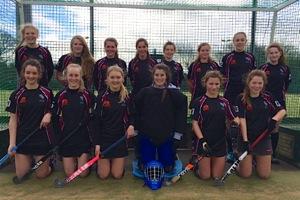 Wilmslow High School's U16 hockey team played in the Cheshire Finals on Saturday, 22nd March, and came away as County Champions.

The girls qualified for the finals way back in November following wins over Grange Hartford, Brirkenhead and a draw against King's School Macclesfield.

There was a comfortable 4 – 1 win for Wilmslow against Queen's Chester in the opening fixture of the Finals, with Ava Johnston scoring twice and Saskia Swatland and Anna Perry scoring a goal each. Ava and Saskia were to score one each in their second game as well, a 2 – 0 win over Lymm High School.

The final match of the day against a strong Fallibroome side finished in a 1 – 1 draw, with Rachel Bond's goal cancelled out by a Fallibroome equaliser, but that was enough for the Wilmslow side to claim the title. Wilmslow had lost out on goal difference to Fallibroome in last season's competition, so it was a relief to turn the tables and claim their fourth county title in the past five years.

The team played extremely well throughout the day and were enthusiastically supported by some very proud parents, but special mention must go to Saskia Swatland, Ava Johnston, Anna Perry, Georgina Clee and Rachel Stoner for a string of outstanding performances.