Guild Players to perform How The Other Half Loves 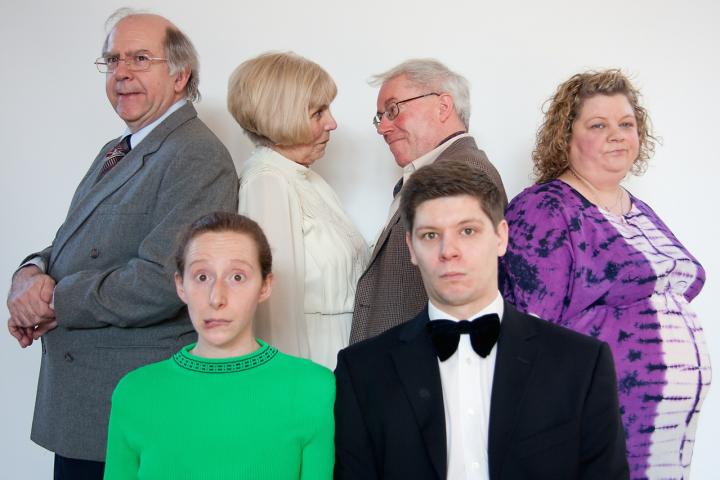 Wilmslow Guild Players' next production is the classic comedy "How The Other Half Loves" by Britain's much-loved playwright Alan Ayckbourn.

Set in 1969, this clever comedy focuses on three couples where the husbands all work for the same company. Frank is on the upper level and the others are subordinates. One couple is very keen but a bit hopeless and the other couple is more promising but she is a slob. The play takes place on two consecutive nights at dinner parties. The clever Ayckbourn twist is that the two nights are played to the audience at the same time on a split stage, which makes for much hilarity.

The production is being directed by long-standing Guild Players member Grace Reed. "I like Ayckbourn's plays because he explores characters and develops the interaction between them," said Grace. "We have all met people like these and know their foibles and twists of fate that can happen because of the differences between them."

This production is being presented "in-the-round", which means the audience are very close to the action onstage. "I decided to set the play in-the-round because it frees the actors to behave in a more natural way," continued Grace. "It also poses some challenges for the audience to use their imagination because there is no scenery."

As usual there are a lot of funny moments and the Players have had many laughs whilst rehearsing. "It is lovely to have four members that have been with the Players for some time and it is a joy to have two new members to complete the cast," said Grace. "I have thoroughly enjoyed the past few weeks and hope the audience will enjoy our offering."

The Guild Players now provide the facility for you to book and print your tickets online. "This is a new system we have just started using for this play," said ticket secretary Bill Beton. "We've had good feedback on it so far, because our customers can book, pay for and print their tickets all through our web site. There are no additional booking fees for this – the price is the same as traditional methods."

The play runs from 9th to 12th April at Wilmslow Guild on Bourne Street. Tickets cost £7 and can be booked online at www.wgp.org.uk. Alternatively tickets can be booked by calling 01625 520126 or emailing tickets@wgp.org.uk.