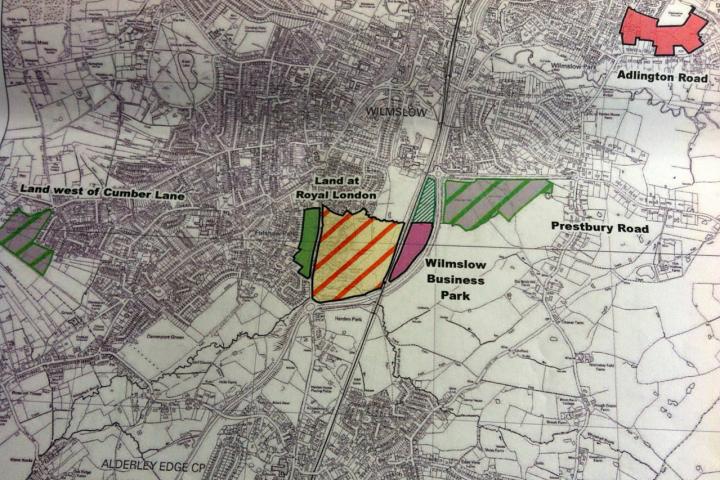 The news that Cheshire East has signed off the endless Local Plan consultation, giving the go ahead to what amounts to a developer free-for-all on greenbelt land around Wilmslow amounts to a total sell-out of residents views.

The council has ignored the constructive concerns of residents about preserving the semi-rural character of the town and building on greenbelt land, when many brownfield sites are available and failed to justify their claims.

A growing ring of development is now set to destroy what's left of the character of the area and add hugely to traffic gridlock. The Waters office development zone underway on the congested Wilmslow - airport road, Manchester's Airport's bulldozing of a further 96 acres of greenbelt at the M56 junction for more business units and Stockport's plans to build around 900 houses on the old Woodford airport site will strangle the area.

But even that is not enough for the council. Approval for a new Handforth East township of 2,300 houses next to the bypass will destroy the last open view we have to the Pennine Hills - a lovely feature.

Council backing for yet another ugly business park on greenbelt land between the Royal London offices and the Wilmslow bypass and more housing off Prestbury road will destroy the last open views Wilmslow has to Alderley Edge. We don't need more speculative business estates ringing our town, when a significant number of buildings remain unoccupied in the local region?

A report in 2011 by the Campaign to Protect Rural England found that many of these projects actually involved displacing existing jobs from elsewhere in the area.

Meanwhile Wilmslow Town Council, which should fight to keep the character of the town, mostly lies flat on its back.

Planning head Adrian Fisher and Council Leader Michael Jones parrot the usual 'sustainable communities' and 'sustainable growth' mantras. They haven't a clue what this really means. They talk of extending greenbelt in other parts of the county. That is of little interest to people in Wilmslow and Handforth. Build more roundabouts and fill them with traffic lights will ease traffic gridlock they claim. Anyone can see that congestion worsened when multiple lights were planted on the A34.

The airport growth predictions fly in the face of major oil energy decline in a few years as global demand outstrips supply and precious farmland we will need to grow more local food is set to be cemented over.

We should fight this madness to the end and look for more rational people to serve our needs.

Julian Barlow
It is increasingly apparent that our elected representatives have scant regard for the concerns and opinions of those they claim to represent. We, the public, are financing a "can't do" council who do nothing to represent public opinion, little to encourage economic prosperity in our towns and have entire departments dedicated to telling us what they are unable to do. In fact, the only people who seem to benefit from CEC's "can't do" attitude are those who pay nothing into the coffers. Perhaps if collectively we refused to pay our council taxes, CEC might suddenly regain their hearing.

DELETED ACCOUNT
CEC "regain their hearing?" There is no chance of that. In with the document informing us of next year's Council tax there is a little booklet entitled, "Cheshire East Best in the North West". I don't know how much this booklet of propaganda to send to all households cost, but whoever produced it certainly has a sense of humour.

Maria Quin
Just want to add my support to the above comments and say I think Julian's suggestion of us withholding council taxes until we are heard is an excellent one. It seems to me the only way to get our councils attention is to fight with what they value most and that's clearly cash! It's a disgrace!

Rehana Hindle
Do any of the people who are in charge of our area live in the areas affected in Wilmslow ?Where do they live and are there areas of greenbelt equally affected near them. Or are they there just of the money!!!
I am just horrified at their total lack of co-operation . They should be made accountable for the future problems we will face and more importantly the stress they are causing the residents of Wilmslow now.
Introduce a fine for individuals currently responsible or the ones that make collective decisions or even a possibility of a Jail sentence as to why the brownfield sites were not used first.
Its a 9 to 5 job for most, and doesn't affect their lives I presume and this really sums it up.
Perhaps a TV documentary looking at how they actually function and their backgrounds and more importantly their job descriptions would give us a better understanding as residents. They should be named and shamed on all forms of media!

Chris Jones
Looks like someone's in for a fist full of dollars.

Kathryn Blackburn
There is a planning application in for 26 houses with access on the same road that our dear leader Michael Jones calls home : 14/0943N Mill Lane Bulkeley SY 14 8BL. Do you feel a letter for support coming on dear readers and perhaps for the need of a supermarket there just to make it more robust and sustainable ofcourse ?
I note a far larger window left open for comments by members of the public than the Adlington Road site had, quelle surprise.

Jonathan Vose
Quick point, the Local Plan is not yet 'signed-off', nor does it give rise to a 'free-for-all' to developers. Yet. At present, the emerging Plan should carry little or no material planning weight.

The Council has signed off its consultation programme and put forward what it thinks to be a robust planning strategy. This will now be overseen and examined by an independent Planning Inspector, who is duty bound to undertake a balanced consideration of the Council's proposals, alongside the views of locals residents, to ascertain whether the Plan is considered to be 'positively prepared', 'justified', 'effective' and 'consistent with national policy'.

If it cannot be justified that ALL of the above considerations are met by the Plan, it will be found to be 'unsound' and sent back to the drawing board, in part or in full.

The important message is that the Plan is not yet a done deal. It still has to cross its most important hurdle - independent/Government sign-off.

If people can present valid planning grounds as to why the plan is considered unsound, or actual deliverable 'brownfield' sites can be demonstrated in preference to those Green Belt or greenfield sites put forward by the Council, then there remains every chance that the impositions of the Plan can be resisted.

This is the worst possible time to be throwing in the towel. In real terms, the true test period of the Plan is just beginning.

Mark Robertson
Mr McGavin speaks for the vast majority of people local to this area. We feel let down by our elected representatives who sell out to the highest bidder. Our council leaders are hell bent on ruining the aspects of life that make our community special all in the vain attempt of economic growth. Public opinion is there for all to see in petitions, objections and protest groups but these are all ignored. The A555 "relief" is a classic example of this. Marketed as the A6 bypass this half baked scheme loosely modelled on a failed road scheme from the 1950's will only serve to bring more traffic to the area, pave the way for new executive homes at Aerospace and Handforth "new town and allow new development at airport city on a scale never seen before. But when residents object siting the destruction of ancient protected woodland (Carr Wood and Mill Hill Hollow) along with the loss of precious green belt the politicians simply state that "overwhelming economic benefit" is more important.
Our councillors should be deeply ashamed of themselves as future generations will lament their decisions long after they have retired on their ring fenced fat cat public purse pensions.