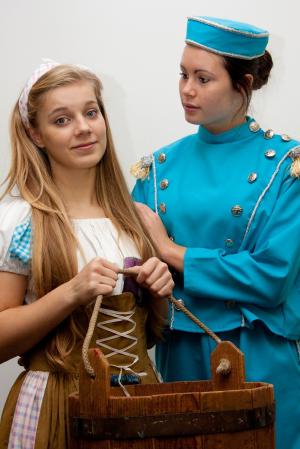 Wilmslow Guild Players' Christmas pantomime this year sees the return to the Guild Theatre of perhaps the best-known and most-loved panto of them all – Cinderella.

"Cinderella is THE classic love story," said director Lee Tipton. "It's a rags-to-riches tale which many films and adaptations have used as a basis for their own. I wanted to do a traditional panto and this is the best of the bunch."

In this version of the panto, there are comedy and serious parts which will delight the audience. "I have used some contemporary and some less-known music and songs in the show, which adds an eclectic mix," continued Lee. "A particular challenge is of course the transformation scene, where the mice and pumpkin change into the footmen and coach. Again I aimed for a simple solution to this; smoke and mirrors do their best!"

"With it being such a popular panto we've had high demand for tickets this year," said ticket secretary Bill Beton. "Our matinée performance was sold out in only five days. At the moment we still have some tickets left for all of the evening performances, although the Friday and Saturday nights are nearly full."

"All the cast from age eight to their eighth decade have enjoyed working as a team, making this a true family show," said Lee. "Within the whole company of actors, backstage crew, carpenters and painters there is a family of people who pull together year after year, which makes the Guild Players' pantomime a joy to be involved with - and it shows on the stage!"

The pantomime runs from 11th to 14th December at Wilmslow Guild, the adult education centre on Bourne Street. Performances start at 7.15pm. Tickets cost £7 for adults and £5 for children and can be booked by calling 01625 520126 or emailing tickets@wgp.org.uk.