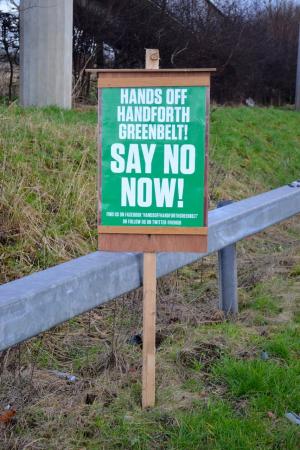 We, Hands off Handforth Green Belt residents group, would like to raise several issues following the Public Meeting hosted by Handforth Parish Council on Tuesday 5th February at which Cllr Michael Jones, Leader of Cheshire East Council, and Adrian Fisher, Strategic and Planning Housing Manager, were present to discuss their proposals for a new development in Handforth.

Firstly we’d like to address the scaremonger tactics employed by Cllr Jones regarding developers.

The “concern” that developers will build on Handforth’s Green Belt land is fictitious.  Developers cannot build large-scale estates on Green Belt, unless the Local Planning Authority chooses to allow it – see the National Planning Policy Framework. If the Council resists, there is absolutely no prospect of such building.

Secondly, with regard to the numerous statements he made regarding the proposed new settlement we would like to clarify this area of land is in Handforth, and, on its Green Belt.  It is “owned” by Cheshire East Council, who are in fact only the custodians as the land belongs to the residents, and who would receive an estimated £200 million pounds for selling it.

The land is a buffer between Cheshire East, Stockport Metropolitan Borough and the proposed development of some 800 houses in Woodford on the former Bae site.  Statements by the leader of Cheshire East Council, Michael Jones:

These statements are diversionary, disingenuous and misleading.

Handforth residents have clearly stated their opinion in the Summary Report of Consultation regarding the initial Draft Handforth Town Strategy. 48.1% of residents disagreed with the alternative development option of creating a new sustainable community to the east of the Handforth Bypass, 7.1% more than those who agreed.

In addition a petition comprising of over 1,000 signatures (ongoing and currently circa 1,500) was handed over to Adrian Fisher last November worded as follows:
“As a result of reading the Draft Handforth Town Strategy Consultation document, I the undersigned am strongly opposed to Cheshire East Council’s intention to build large numbers of houses and other developments in Handforth.

"The current developments and potential to build on brownfield sites are sufficient for our needs until 2030, there is no need to build on the green space surrounding and within the village.”

We were under the impression that Cheshire East Council were conducting a consultation and would listen to residents views. Is it therefore even lawful that CEC have posted a video on their website and on YouTube in which the Deputy Leader, Councillor David Brown states;

“We have taken a very brave decision, we are going to build two new villages which are proposed in the plan, one in the north and one in the south ...”?

We would urge residents to fill in the questionnaires supplied by ourselves, HOHGB, and Cheshire East Council but also to write directly to their local councillors copying in Michael Jones, Leader of Cheshire East Council and Eric Pickles, Secretary of State for Communities and Local Government, informing them of your views.

If residents wish they can also forward a copy to us at handforthresidents@gmail.com and we will collate and record all letters to ensure a fair hearing.

This is a member post by Toni Fox, Hands off Handforth Green Belt residents group.

Mike Dixon
Councillor Brown, how can you post videos saying " you are going to build...."
I suggest you have consultation and not confrontation with the people who live in Handforth and who elect fellow members!
Handforth unite, together we can win this fight.

Graham Jackson
Reading many of the comments on the development plans for Wilmslow/Handforth. My opinion on is one of misinformation, obstruction, lack of clarity and intent. We seem to be fighting a maze of parish/local councillors, council officers, planners, developers and property/landowners all with their own agendas. What started out as consultation has exploded into a rash of advanced concepts sweeping away the requirement for proper interaction between the public and council. Has the council not learnt anything about being honest I.e. Llyme Green and this is only what is the public domain. No wonder the general populous loses faith in politics/politicians.