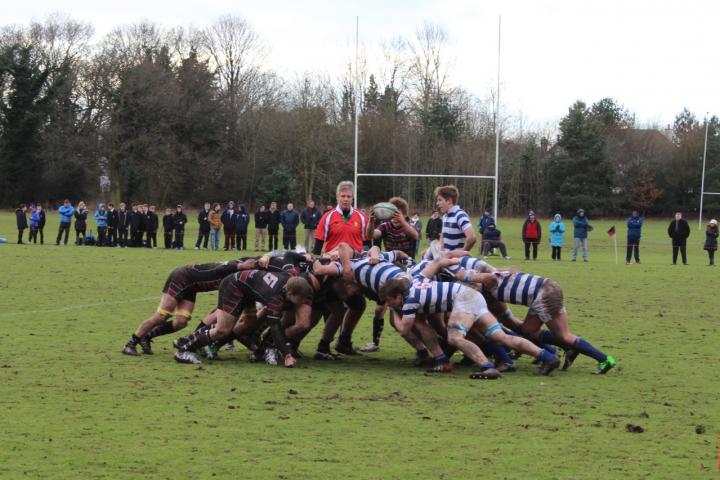 After controlling general play, Warwick secured victory over Wilmslow in the quarter finals of the Daily Mail Cup.

On a disappointing afternoon for the home team, a strong Warwick side did just enough to hold on and beat Wilmslow. The game finished 10-10, however, Warwick progress to the semi finals being the away team on the day.

Coming into the match in good form, Wilmslow plugged hard for a result but Warwick’s defence held firm and ensured they battled to keep a 100% record in the competition.

In the opening minutes, Warwick made some promising attacking play and although at first thwarted by Wilmslow’s defence, they got a slice of luck to score. Five minutes in, with Wilmslow pushed up the pitch, Warwick scrambled the ball through with a neat grubber kick to send their own attack clear. Sprinting away from the pack, and no tackles imminent, Warwick were able to score their try right between the posts. Converted easily, an early 7-0 lead merited their initial efforts.

Wilmslow picked themselves up and made a decent advance into the Warwick half, only to be stopped by some well timed tackles. The play switched again, Warwick re-asserted their authority and gained a penalty, which was missed. Throughout the game, goal-kicking was tough because of some strong winds.

In the tail end of the first half, Warwick pounded the Wilmslow line, but to no avail. Despite being particularly on the back foot, Wilmslow’s heroic defence kept the scores at 7-0. A penalty to Wilmslow was struck wide, meaning the score remained as it was.

Bearing in mind previous performances in this competition, Wilmslow felt slightly aggrieved at their own showing in the first half, and were thankful the difference was only seven points. Improving as the half went on, Wilmslow took account of themselves and knew that the resilient Warwick defence would be a tough nut to crack.

Immediately after the break, Warwick continued with their dominating style, pushing Wilmslow all the way. Patient and composed, Wilmslow found an escape route and managed to kick for touch. Mounting an attack of their own, they forced an opening from a lineout, and made the vital breakthrough. Athletically jumping over the bodies in the ruck, Robert Taylor was able to touch down. Despite under immense pressure, Wilf Noden kicked precisely to level the scores.

Rejuvenated after this try, Wilmslow came back into the game even more, balancing the run of play as they fought on for an advantage. This arrived in the 61st minute, Noden scoring a penalty to give Wilmslow a slim lead at 10-7.

Almost instantly following this, Warwick had a try ruled out by the officials. Undeterred, the away side remained camped in the Wilmslow half, probing for a chance. After a completely scuffed penalty from Warwick, it began to look as if Wilmslow might yet hold onto their slender lead. However, just six minutes from time, Warwick scored a penalty to equalise. They knew that if they could maintain the scores at 10-10, victory would be theirs.

Roared on by a vociferous crowd, Wilmslow made a last gasp effort to clinch the win, but were unluckily denied by a cruel bounce. The referee signalled the end of the match, the Warwick players ecstatic at having reached the final four and Wilmslow understandably crestfallen.

Concluding a magnificent run in the cup, Wilmslow can certainly be proud of their achievements. Playing an attacking, flowing brand of rugby throughout the competition will have caught the eyes of many and shows great promise for next season. With regards to Warwick, their unerring defence may see them go all the way.