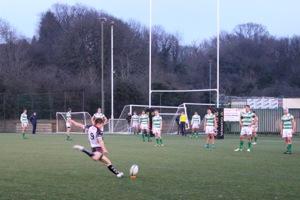 The sub-zero temperature was no problem for Wilmslow High School’s First XV, as they edged a closely-fought encounter with Durham to progress to the Quarter Finals of the Daily Mail Cup.

In their toughest test yet, Wilmslow came away from Burnage Rugby Club with a vital win that ensured they remain the only state school left in the competition. Matching Durham School for much of the game, they did just enough to give themselves the victory they deserved.

Despite the snow in the days leading up to the game, the match was given the go-ahead, being played on an artificial surface at Burnage Rugby Club.

With the temperature hovering around freezing, Durham kicked off, and made a real impact in the early exchanges of the game - forcing Wilmslow back almost immediately with some big carries from their pack and centres. It was only due to some strong Wilmslow tackling that the threat was suppressed.

Wilmslow managed to weather the storm in what was a relatively open first ten minutes, with both teams attacking with ball in hand whenever the opportunity arose. Midway through the first period, after some powerful play at the ruck, Durham won a turnover only for Wilmslow to snatch it off them almost immediately and start a counter attack from their own half. Probing for an opening deep in Durham territory, they won a penalty which was duly converted by scrum-half Wilf Noden.

With the match still in the balance, Durham managed to surmount a period of sustained pressure. Despite stoic defence from Wilmslow, Durham’s attacking play was relentless and switching the play from right to left, and when a gap appeared in the Wilmslow defensive line, they took their chance to go over for a try under the posts. The conversion of the try left the scores at 7 - 3 to Durham as half time neared.

As the sun set, and the first half drew to a close, Noden managed to kick another penalty to cut the deficit to one point. Half time saw intense discussion in both camps, with both sets of coaches realising that a crucial second half lay in wait.

With the floodlights burning brightly, Wilmslow kicked off the second half and took to the game to their opponents mounting wave upon wave of pressure on the Durham defence.

Galvanized by Durham’s efforts before the break and behind on the scoreboard, Wilmslow created a moment of brilliance out wide to prove this game was far from over. Through clever positioning, Rob Shotton instigated an intelligent kick and chase, deftly flicking the ball forward, running onto it and repeating the trick to gather and sprint for the line. Evading the attempted tackles, he dived over for the try in the corner.

With the referee partially unsighted, it was only after consultation between the referee and his assistant that the try was confirmed. With the try being scored virtually on the touchline, Noden was unable to convert a tricky kick. Nonetheless, an 11-7 lead was something to build on for Wilmslow as the second half went on.

The game became more stretched, as Durham battled to score, coming close after a rapid break from their winger, denied by some heroic scramble defence from the Wilmslow side. However, buoyed by that defensive effort, Wilmslow turned the game on its head once more and battered the Durham line with some sustained pressure. Noden slotted another kick at goal to make it a seven point gap at 14 – 11.

Coming forward again, Wilmslow had Durham on the ropes once again and managed to score another try through a sweeping attack to the left wing where Gallagher, the full-back, dotted down. With the scores at 19 - 7 and little time left on the clock the result may have seemed a foregone conclusion. Hardly so! Durham rallied and pummelled the Wilmslow defence, getting ever closer to a try. Their final stab to get something from the match gave them a late converted try, setting up a frenetic finish.

As Durham gathered momentum, an end to end final few minutes saw possession change hands on numerous occasions, and every last drop of energy being used by both teams. Holding firm, Wilmslow kept Durham at bay and when the time came, kicked for touch to end an enthralling match.

With the final score 19 - 14, it could have gone either way, but Wilmslow once again showed their tenacity and grit to progress. In a game that proved their hardest test to date, Wilmslow more than stepped up to the challenge and demonstrated exactly why they deserve to be in the Quarter Finals of the Daily Mail Cup.

Drew Donaldson
I was one of the fortunate many who watched this match. So when and where is the quarter-final match to be played?