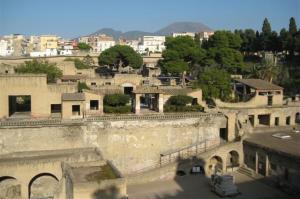 On Friday 19th October, 51 students and 5 teachers from Wilmslow High School jetted off to Italy to spend five days roaming the isle of Capri and searching the ruins of Herculaneum and Pompeii. These students and teachers were united with one name. Team Italy 2012.

The trip didn’t start quite as expected when take off was delayed by over three hours - a plane had to be flown in especially from the Czech Republic. Nevertheless, Team Italy didn’t lose their enthusiasm and thoroughly enjoyed their ‘educational’ holiday.

An early ferry to the beautiful isle of Capri was the perfect way to spend the first day of the trip. A boat ride around the island and sailing under the Rocks of Faraglioni was rounded off with a sight of designer Giorgio Armani’s house, and a rather large ice cream! Being a geography trip, the students couldn’t get away with no work. Luckily just a couple of pedestrian and litter counts satisfied the staff - for one day anyway!

The gorgeous 28°C Sunday took Team Italy to the peak of dormant volcano Mount Vesuvius, and down again, before an extremely eye opening trip to Herculaneum. Here our team met Professor Michael Binns, an archeologist from Durham University, who offered to take a small group of students on an ‘exclusive’ guided tour around the site of Pompeii.

Everyone has seen the pictures of the Amalfi Coast, but you can never say it is truly beautiful until you have seen it with your own eyes. Like the rest of the region, the Costiera Amalfitana lies in a Mediterranean climate. Unfortunately the only land route to the scenic coast is the 25 mile (40 kilometre) long Strada Statale, which winds along the coastline from the town of Vietri sul Mare in the east to Positano in the west. Unsurprisingly, most of the team spent the majority of the journey with their eyes closed, rather than snapping photos of the steep drop to the sea just a few metres away.

In Pompeii Team Italy wandered along the streets that many people died on nearly two thousand years ago when Vesuvius erupted and buried the city in thousands of tons of ash. Leaving the historic site earlier than planned wasn’t quite on Wilmslow’s agenda for the day but even so spirit wasn’t lost, as shown by all the singing and chanting that was very much appreciated by the teachers on the three hour coach ride back to the hotel.

Shock horror when on the day of our departure, the road to Rome had been closed, so a four hour journey evolved into a five hour journey. This unfortunately limited our time in Rome’s famous colosseum to only twenty minutes. After yet another two hour delay, Team Italy gathered up the rest of their energy to climb aboard the plane, and endure another three hours travelling.

Following the launch of the photo competition in Capri, all the students – and teachers! – took it in their stride to snap THE photo of the holiday. The award-winning picture was taken by Mrs MacNee (pictured).

This is a member post by Sophie Donaldson, aged 15.