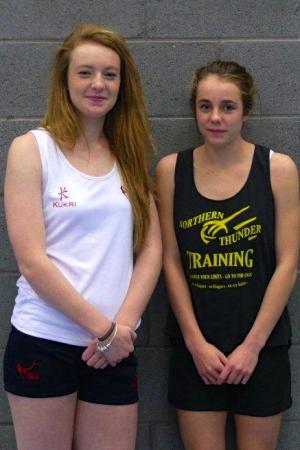 Firstly, Year 12 student, Georgi Webster, who was already part of the England U17 squad and plays for Northern Thunder, has been called up to the England U21 long squad. She is now preparing for the World Youth Championships and will hopefully be selected as part of the final squad taking part in these games next year.

Secondly, Year 10 student, Iona Darroch, had a demanding summer of training and trials but it all proved worthwhile when she was selected for the Regional Squad and Northern Thunder Talent Squad.

To top off a fantastic start to the new season, Wilmslow High School hosted the U19 County Tournament last month. The Wilmslow U19 team, captained by Alex Palin and coached by PE teacher Mrs Caroline Dunn, won the trophy, retaining it from 2010 (there was no tournament in 2011).

Mrs Dunn said, "It is a pleasure to work with such a fantastic squad of players who have natural ability, the right work ethic, a determination to succeed and strong team cohesion. We were delighted to win the Cheshire U19 tournament earlier this term and are very much looking forward to the first round of Nationals Schools' competition on November 24th."