Another hero of World War II 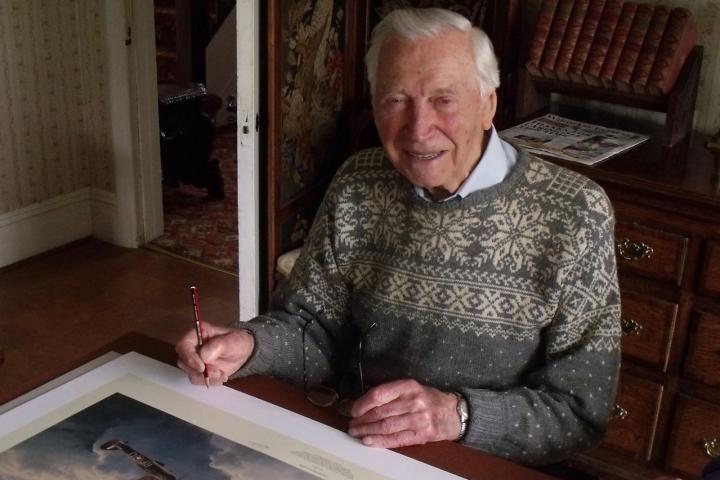 Polish armed forces and intelligence services made invaluable contributions to the British war effort. Following the joint German/Soviet invasion of their homeland in September 1939 and the subsequent Nazi occupation of most of continental Europe thousands of political and military émigrés managed to reach the UK. Mercifully many were skilled and brave.

Notable was the pivotal effort of the Polish Air Force in the Battle of Britain, August/September 1940. Four squadrons took part - the biggest non-British contribution. Comprising 5% of the pilots they accounted for 12% of the kills. The famous 303 Kosciusko squadron claimed the highest number - 126. In all 145 Poles flew for us and 31 were to perish.

Commander-in-Chief Air Marshall Hugh Dowding said "Had it not been for the magnificent work of the Polish squadrons and their unsurpassed gallantry I hesitate to say the outcome of the battle ....... would have been the same". Afterwards 17,000 airmen continued to support Fighter and Bomber Command.

The Polish army of ultimately 140,000 (reformed and based in Scotland) fought in many campaigns including the Dieppe raid, Operation Market Garden, Tobruk, D Day, Falaise Normandy, Ancona and Berlin. They became shock troops - most famously in the Battle of Monte Cassino, where the Polish troops, led by General Anders were credited with the liberation of the abbey and marked the victory by raising the Polish flag over the ruins on 18th May 1944.

Three thousand served alongside the British Navy - many subs were crewed by Poles. Escorts were provided for convoys, evacuating Dunkirk, protecting D Day landings and seeking the Bismarck.

Less visible was the contribution of the intelligence services. Before the war, 3 mathematicians had pioneered decryption work and cracked the first Enigma Code, which they generously gave to us to allow Alan Turing and his team at Bletchley Park us to eventually crack the more advanced Enigma Code used later in the war.

One of Churchill's greatest regrets was that on the eve of its liberation, Poland fell under the yoke of the Soviets, but as he prophesized "the soul of Poland is indestructible .... she will rise...".

One redoubtable Polish hero was long-time resident of Wilmslow Colonel pilot (Pulconik) Jerzy Stanislaw Mencel of the PAF (also Group Captain RAF), DFC, KM***, AFM***. He was born on 6th April 1918, the first year of the new Polish Republic, in Poddebice, Lodz and was educated at the State Technical and Industrial School. He became an instructor in aviation in 1937. He fought in the Battle of France, then evacuating to England in June 1940 he unfortunately suffered an accident, fracturing his spine and pelvis. However, he eventually returned to flying, piloting mostly Spitfires and Hurricanes in the 308 Krakow Squadron and later in the 317 (Vilnius Squadron) defending the South coast and convoys including the Dieppe raid.

Later he was assigned to 309 Czerwinska escorting bombers. His operation of 9th April 1945 is permanently recorded in the annals of the PAF; escorting bombers to Hamburg, his team was attacked by 8 of the latest German jet fighters Messerschmitt ME 262 Schwalbe (the world's first operational jet powered fighters). Within 15 minutes and without loss they shot down 4 of these fighters. Jerzy also covered bombers destroying Hitler's HQ at Berchtesgaden. After the war he received his 4th Cross of Valour and the DFC.

After the war Jerzy, known here as Jurek or George, married Barbara Stuart Bailey at Brompton Oratory, Kensington. Barbara was from Tantallon Lodge in North Berwick, East Lothian and was the daughter of Mrs Mirabel Stuart Bailey and Brigadier General Vivian Bailey, DSO, commander of the 142nd Infantry Brigade in the Great War. Jerzy became a British citizen in 1949 and he and Barbara had 1 daughter, Belinda, who married John Coghlan in 1978. They still live locally. Jurek and Barbara had 3 grandchildren.

As befitted his education he joined ICI where he worked until 1977. He then became the company's representative for Eastern Europe, working closely with textile firms specializing in cellulose yarn and fabrics. After retirement he was offered a job at ICI Greece where he lived for 2 years. He was ICI consultant then visiting many countries before retiring at the aged of 75. Jurek died on 28th August 2012, aged 94 - he is interred in Wilmslow Cemetery.

He was deservedly lauded in the country of his birth; made a Freeman of his town in 2003 and a street there is named after him. During the 2007 World Congress of Aviators he was awarded the "Pro-Memoria" medal by the Minister of National Defence.

Yvonne Howson
And a lovely man he was too.

Ken Mackay
A true unassuming hero. Pleasure to know him.