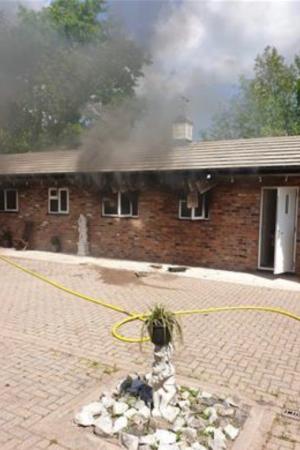 Firefighters from Wilmslow and Knutsford were dispatched to reports of a domestic building fire in Upcast Lane at around 12.45pm today (Thursday, 21st May).

On arrival the crews discovered that a smoke alarm was sounding as a result of a fire in a ground floor bedroom.

The electricity supply to the property was isolated and two firefighters wearing breathing apparatus entered the building. They used an extended hose reel jet to extinguish the fire.

Once the fire was out firefighters used a large fan to clear smoke from the property. They also damped down the area affected by the fire and removed burnt items from the building.

No-one was unaccounted for when the firefighters arrived and they were in attendance for nearly four hours.

An investigation into the cause of the fire has been completed and the fire is believed to have been caused by an electrical fault.