Firefighters called to bin fire in the early hours 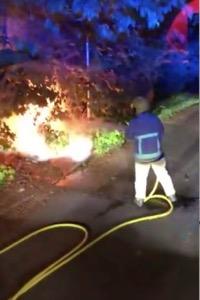 Firefighters were called following reports of a fire in the open on Picton Drive in the early hours of this morning.

On arrival just after 1am the crew found a metal bin, located inside bushes, which was well alight.

They used a hose reel jet to extinguish the flames and were at the scene for 20 minutes.