Concerns for road safety over plans to import 33,000 tonnes of soil to Morley Green farm 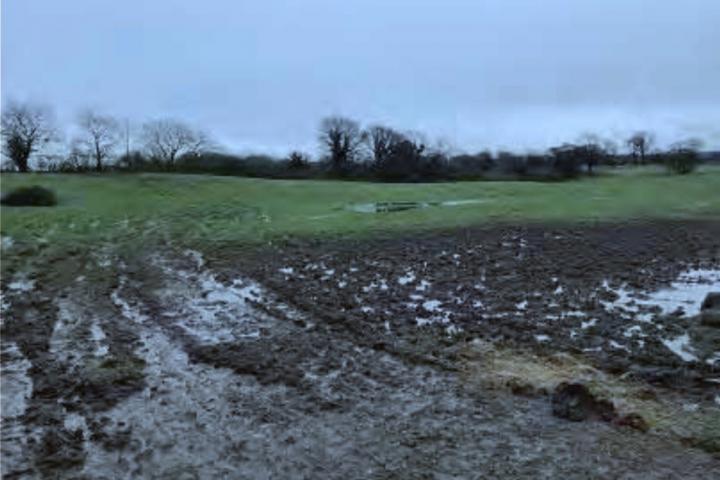 Plans to import up to 33,000 tonnes of soil to infill low areas and improve drainage at a farm on the outskirts of Wilmslow have raised concerns regarding road safety and noise.

Mr Terry Cummins is applying for planning permission for the second phase of his scheme to restore and improve the land at Saltersley Hall Farm off Burleyhurst Lane, which is currently used for the growing of hay and grazing of horses.

According to the planning application "The proposed works are to improve the quality of the final restored land to provide an improved and better drained paddock for the grazing of horses."

The soil will be imported via Burleyhurst Lane using 8-wheeler wagons which will require the creation of temporary access tracks to be removed on completion of the filling works.

It is proposed that up to 40 wagons will travel in and out of the site on a daily basis between the hours of 8am and 5pm Monday to Friday - which will pass through a wheel wash before leaving the site.

It is also proposed that all watercourses will be widened and deepened to reduce the potential for flooding.

Mobberley Parish Council has objected to the planning application because and it is felt that the proposal would generated excessive noise and disturbance to residents and road users, the increase of commercial vehicles required for this operation would challenge road safety and that the application failed to explain exactly the work involved and the potential impact on local residents and road users.

A Morley Green resident said "The latest applications fill us with dread. Also, the result of phase one and earlier work has undoubtedly altered the water table with run-off onto the farm next door and in the long term impacting on Lindow Moss peat bog. But now comes the worst.

"The area to be 'improved' totals 85,773 square metres. If this were to be tipped to a depth of 1 metre (in the original tipping exercise depths of up to 2 metres have been reached) then this equates to approximately 9200 wagon loads. Multiply this by a rate of up to £75 a load and there is quite a profit to be made which will increase proportionately the more tipping is carried out. All these wagons on Morley Green Road, Mobberley Road and Burleyhurst Lane to 'improve' the land for agriculture also begs the question - what was wrong with the land in the first place?"

The plans can be viewed on the Cheshire East Council planning portal by searching for planning reference 20/1586M.

Keir Faulkner
Where is all this coming from?

Anthony Evans
The first thing to point out is it isn't soil that is being tipped but inert waste, at least that is what it says on the EA permit. Waste is considered to be not worth recycling and usually contains large amounts of clay and rubble,
Second, it is amazing that after a 22 year battle to save what is left of Lindow Moss (Saltersley Common) Peat Bog that Cheshire East would consider allowing tipping within this delicate catchment area. The sand that was excavated and removed some two years ago (see photo) with the resultant holes filled with waste, is one field away from the boundary of the bog and will have a detrimental effect on the water table.
As for improving the land for agriculture, contractors pay to get rid of this stuff so really it's just a nice little money spinner.
Tony Evans
Saltersley Common Preservation Society

Nick Jones
@ Anthony; The Traffic consideration .. would appear inconsequential compared to the exact content of what is actually being 'Dumped' ..

INERT WASTE https://www.gov.uk/guidance/landfill-operators-environmental-permits/landfills-for-inert-waste
Inert waste; is waste that does not undergo any significant physical, chemical or biological transformations .. will not dissolve, burn or otherwise physically or chemically react, biodegrade or adversely affect other matter that it comes into contact with, in a way likely to cause environmental pollution or harm to human health. The total leachability and pollutant content of the waste and the ecotoxicity of the leachate must: be insignificant and not endanger the quality of surface water or groundwater

SOIL https://www.britannica.com/science/soil
The biologically active, porous medium that has developed in the uppermost layer of Earth’s crust. Soil is one of the principal substrata of life on Earth, serving as a reservoir of water and nutrients, as a medium for the filtration and breakdown of injurious wastes, and as a participant in the cycling of carbon and other elements through the global ecosystem. It has evolved through weathering processes driven by biological, climatic, geologic, and topographic influences.

Rick Andrews
The lorries turning at Morley Green are ripping up the tarmac. Perhaps the applicant should undertake the necessary maintenance. Also Construction equipment is being stored on “the private nature reserve “ adjacent to the peat bog and destroying wildlife habitat. It is a commercial venture, are business council rates due.

Malcolm Wilson
Thank you for your all of your comments regarding this issue.
I would be really grateful if you could take the time to put your thoughts on the Cheshire east planning site to add weight to those already posted. This “development” needs to be brought to the attention of the planners in order to protect our environment.

Ray Byrne
I walked by this area last week, my first time for several years and I couldn't believe the devastation that has taken place, I believe that a Planning Application has been submitted to "restore the land for Agricultural use". What!? It was always Agricultural land, how on earth can Cheshire Council fall for this 'scam'. What an absolute disgrace.

Anthony Evans
Thank you Nick Jones for pointing out the difference between inert waste and soil. Another difference is the contractor pays to tip waste (anything up to £75 per ton) whereas you pay for soil (up to £10 per ton).
The other strange occurrence is that when Cummins applied for phase 1 the only people notified were Mobberley Parish Council, Mobberley Councillor
Charlotte Leach, Burleyhurst Farm and The Shieling. To the best of my knowledge they all objected.
Not only were the immediate neighbours not consulted but also all those with houses on Morley Green Road, Mobberley Road and Burleyhurst Road who now have tipper lorries thundering past on a daily basis.
Shouldn't they have been notified as well?

Malcolm Wilson
Thanks to Anthony for his comments.
Just to be clear Burleyhurst Farm most certainly was not notified of phase 1, odd when you consider it is the nearest house to this!
Keep the comments coming.

Anthony Evans
How strange. I asked CEC who they notified and they included Burleyhurst Farm and the Sheiling. So it appears they didn't notify any residents. Is that legal?

Norma Barker
We live at Hollingee Farm It is adjacent to the quarrying and tipping site that Saltersley Hall Farm has become. We share a boundary for the full length of the Farms. Even so like Malcolm Wilson we were not informed of planning application 19/3422M.
This planning was to involve the movement of a MAXIMUM 2000 tons. At 20 tons per load that is 100 hundred lorry loads. We all know that this amount has been achieved in any one day since the beginning of January.
Where has been the enforcement or supervision???

Keith Marsden
I occasionally walk around the area surrounding the Moss and was amazed when I went near the farm recently. It was simply an industrial site with huge wagons dumping goodness knows what and the land being thoroughly churned up by diggers in addition to the lorries. How on earth is this allowed to happen in this previously quiet rural area? Reading previous comments about the material and its usefulness (or not) one has to wonder what oversight there has been by the Council, whose reputation I understand is not the greatest.

Nick Jones
I note that a number of councils across the UK have prohibited such dumping of 'inert ' mass, that is certainly not soil by official definition, yet CEC sit idly by allowing the burying of bad waste in a covid crisis... Just how many Toxicology tests have occurred to Land and Lorry content ? I suspect nil.. Is this advanced preparation for housing development ? there appears very little legitimate other purpose to damage land in this manner unless a cogent case otherwise can be presented.

Stuart Kinsey
I have, on behalf of The Wilmslow Civic Trust, submitted an objection to the latest planning application affecting Saltersley Hall Farm, also urging CEC Enforcement to ensure that all activities on site cease with immediate effect until determination of the application. (See CEC Planning portal, application 20/1586M)

I would like to know how so much commercial activity has been allowed to develop at a site of considerable importance for wildlife and the natural environment and contrary to Policy SE4 of the Cheshire East Council Local Plan Strategy. That policy states states that all development should conserve the landscape character and quality.

Finally, can anyone tell me whether an archaeological survey was carried out prior to the sand extraction at Saltersley Hall Farm?

Norma Barker
Interesting you should mention an archaeological survey. When you consider Lindow Man was found only just over the fence from this site.you would have thought it would have been first on the list.

Anthony Evans
Mr. Kinsey
I'm afraid there was no archeological survey before the sand was removed because it was moved without any planning application. CEC were informed about what was happening but decided against taking any action. As usual.