Rubbish continues to pile up as bins not emptied for weeks 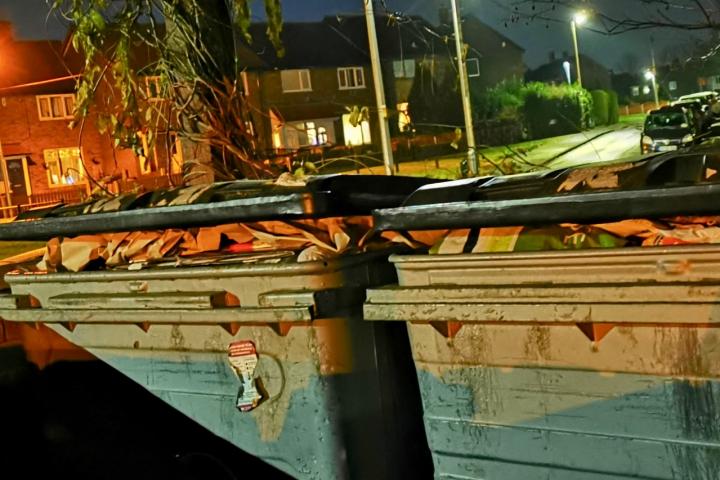 A group of Handforth residents are pleading again to the Council for a regular bin collection as their bins have been missed on so many occasions.

Wilmslow.co.uk reported on the situation at Wilmslow View - a development of 21 flats and one business, on Monday, 5th December 2019, as it was over 8 weeks since their recycling bins were last emptied. This was resolved the next day but since then residents say the situation has got worse.

Local resident Tracy Williamson has called on MP Esther McVey to step in and help them, saying "We now have 4 dumper bins full, the last collection for black bins was mid December and for recycling bins it was 6 weeks ago."

She added "We need Cheshire East Council to step up and empty these bins as it's unacceptable."

Resident Sonia Cooke told wilmslow.co.uk "We are now back in the same situation with the recycling once again but it is now way worse as now our normal household waste hasn't been emptied either.

"The smell of the bins is absolutely disgusting and it is impossible for residents to keep their rubbish inside. The other day I was unable to stand outside our building for very long to chat to one of my neighbours as the smell was stomach churning."

Sonia added "Not everyone has the option to be able to drive to the local tip and nor should we when we pay our council tax etc. This is rapidly becoming a health hazard."

Subsequent to speaking with Tracy and Sonia, the black bins were emptied on Thursday, 2nd January, however the recycling waste is still building up.

Estelle Lewis
I complained to Cheshire East via their website re my silver bin not being emptied. The worst time of the year, it's full of wrapping paper/ squashed boxes etc! I can hear the bin men outside but today is black bin day! Help! East Cheshire replied to my plea and said silver bin would be collected within FIVE days. Meanwhile ......... what do I do with all the rubbish piling up??? No rude answers - thank you

John Duckworth
Mark Thank you for keeping residents up to date - The Christmas period is a difficult period with a slow down in services. The new service is crystal clear - I can't understand why some people find necessary to "moan" about what is an excellent service. I do note that complaints from some Handorth residents appear to be for the very large bins and not the standard bins. Keeping people up to date is all that should be expected - we now know there is not a bottomless pit of money - I am sure the current government will sort this out in time. I now watch with interest developments within Cheshire East.