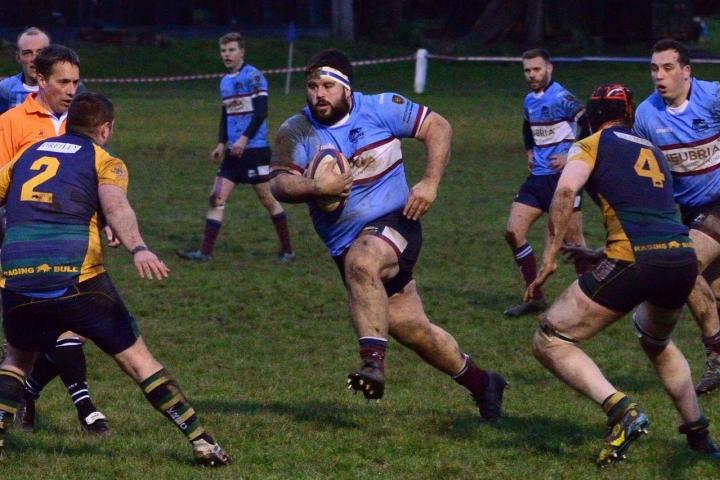 The Wolves finished the first half of their N1W league campaign with a decisive win over Keswick, who look destined to go down a level at the end of the season. There's now a three week break before the season is resumed at The Memorial Ground on 4th. January against their age old rivals from Stockport. For the meantime though, the Wolves can enjoy their ten point lead at the top of the league and hope that some of their extensive casualty list will have recovered sufficiently by January to return to the fray.

As is their want these days, the Wolves got themselves turned over in the first play of the game in their own half and when they were penalised for an offside offence, centre Lewis Bell kicked the goal to give the Cumbrians an early lead. It didn't last for long as the Wolves soon stole the ball on a Keswick throw at the lineout to make ground and a few moments later a fine lineout catch by Jack Masters saw the ball released quickly along the line to Harry Patch on the right wing, who held off the defence for the Wolves opening score.

Three more tries quickly followed for the Wolves to pocket the bonus point and by the end of the first quarter, the game was effectively all over as a real contest. Their second try was from a catch and drive finished off by No. 8 Alex Taylor, the third from a barnstorming charge by prop Adam Taher, who had been lurking in midfield when the ball came to him, and the next by Taylor again, this time from a set piece pushover.

The Wolves were now bossing the lineouts and scrums and their backs were threatening to run riot in the space given them by a loose Keswick defence. No.10 Bob MacCallum saw so much space that he was spoilt for choice as he more than once spiralled accurate cross kicks directly into the hands of his midfield backs and wingers with no Keswick defender in sight.

The Wolves really should have had a hat full of tries during this period but they were repeatedly called back by referee Irvine for marginally forward passes and mishandling. It wasn't until half time approached that the fifth try in the form of another pushover from Taylor came along.

They then added four more tries in the third quarter. Full back Ben Day seemed to be involved in just about everything that was happening as he not only scored twice himself but also put scrum half Sean Street away. The fourth try in this period emanated from MacCallum's quickly taken tap penalty in the Keswick twenty two that finished with flanker Sammy Lawton crossing for the ninth try.

The Wolves then chucked out another forward pass as they ran out of defence from the restart and from the scrum the Keswick side scored a smart try when their right winger Ryan Weir got the ball in open space 25 metres out with no Wolves defence in sight at all. It was all a bit academic at this stage as the Wolves were already over forty points ahead and five minutes later Day scored his third try when he was on the end of a short pass from MacCallum.

President Chris George just muttered that he had lost count of the number of times over the years that he had seen MacCallum and Day combine to produce a try from this precise move. Day's mother on the touchline was vocally thrilled, chanting loudly several times 'that's my beautiful baby'. Whether that's what a large hairy rugby player wants to hear from his mother at such a time is questionable but it didn't seem to upset Ben Day.

There was still nearly fifteen minutes on the clock. The Wolves should really have added more to their tally but a combination of inaccuracy from them and to their credit, a Keswick side refusing to buckle when all was lost, albeit at the cost of successive penalty infringements, kept the Wolves at bay.

Coach Chris Jones had mixed feelings over the performance afterwards. 'On the one hand, he said, we got the five points we wanted and it's hard to be too critical when your side has just scored ten tries but the performance was still a bit disappointing. We weren't as clinical in taking our chances as we should have been. The intensity of our play in recent games was just missing.

It's all very well raising the bar against the likes of Birkenhead Park and Sandbach but you can soon slip up against less fancied sides if you allow your standards to drop with careless sloppy play. We got away with it on this occasion but we may not be so fortunate on another day. Nevertheless, if we'd been offered a ten point lead by Christmas back in September, we would have grabbed it with both hands. We've had to bring in a lot of players, already forty have worn the shirt this season, and it's to the credit of all of them that the side has just kept producing the results.'

The only rugby at the club over the holiday period will be on Boxing Day when a Wilmslow U23 selection will take on Wilmslow High School Old Boys. It's a re-union opportunity in front of possibly the largest crowd of the season for boys who grew up together at school or played their first rugby at the club in the minis and juniors. It's rugby – only faster claims Ric Noden's poster advertising the event.