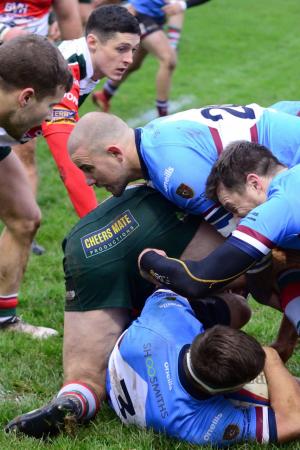 The Wolves winning streak continued with six unanswered tries in their most complete performance of the season thus far against a Waterloo side, fancied by many to be in the promotional mix come next April.

Waterloo saw their fair share of possession, particularly in the second half, when their dangerous back three hoovered up any loose or misdirected kicks and initiated a series of threatening counter attacks, which had the Wolves penned back for lengthy periods. The Wolves defensive line though retained its discipline throughout and did well to restrict Waterloo to just two first half penalties.

In contrast, the visitors had no answer when the cavalry in the Wolves lethal back division got going. Sean Street, Bob MacCallum and Jonny Kennedy are as dangerous a midfield as any in this league, add Kieran O'Rourke, whose influence just grows week by week, the in form James Coulthurst, the powerful Mark Jennings together with Ethan Harding and Ben Day, when both are fit and available, and you have a unit capable of shredding any defence at this level on their day. And this was their day!

Wingers Jamie Kingdon and Sam Cutts are also well capable of providing the finishing touches when given the chance. Up front, a recast pack, still short of several automatic first choices, more than held their own. The return of prop Adam Taher showed in a much improved scrummaging performance from the one that was pushed about the previous week at Vale of Lune. It was also gratifying to see players such as Conor McMurdock, the newcomer Ollie Stockwin and Jack Masters make full contributions at hooker, prop and No. 8 respectively.

Waterloo were first off the mark and had the better of the opening fifteen minutes, forcing the Wolves back and into early handling errors. After eight minutes, they deservedly took the lead with a simple penalty from their full back Darragh O'Brien.They were looking dangerous on the attack again when they were rightly penalised for crossing in the Wolves twenty two and the game then changed with a pair of line breaks from Wolves full back Mark Jennings, leading to the first of three scores for winger James Coulthurst.

Five minutes later, quick clean scrum ball in the Waterloo twenty two released a bit of Merlin like wizardry from MacCallum, which opened up a channel for the Wolves second try from Kieran O'Rourke. The third followed two minutes later when Waterloo got turned over at the breakdown in the Wolves' half and a long kick and chase ended with Coulthurst prodding the ball over the line for his second touchdown.

Wilmslow were down to fourteen players, Sam Cutts being Yellow Carded for an unintended tip tackle, when O'Brien kicked Waterloo's second penalty. Then as half time approached a clean take in the lineout by Seb Pemberton was the prelude to the ball being fizzed across the line to Jennings, who created the space for Coulthurst to complete his hat trick on the stroke of half time.

In the second period, the Waterloo back three of full back Darragh O'Brien and wingers Jacob Allen and Luke Nelson were adept at fielding and running back any marginally inaccurate kicks coming in their direction but despite forcing the Wolves to defend deeply for lengthy periods, the visitors were unable to breach the Wilmslow line and their moves eventually broke down when they were forced into a loose or dropped pass. The Wolves still added two more tries, both absolute beauties.

When the Waterloo hooker got Yellow for a piece of skulduggery, ten minutes into the half, MacCallum planted the kick well into the Waterloo twenty two, the lineout drive was then held until the ball was moved across the back line and a sizzling exchange of passes between MacCallum, Coulthurst and back to MacCallum had the No. 10 scampering in for the fifth try.

The final try had its origins from a late scrum in the Wilmslow twenty two. Jennings made the initial foray down the narrow side and a multiphase passage of play from backs and forwards alike the length of the field ended with hooker McMurdock producing an outrageous side step and finding nobody in front of him he just trotted in to score under the posts. Arguably it was the best of the Wolves tries and a fitting final flourish.

One just had to applaud both the Wolves back play when they had possession and their achievement in denying Waterloo a try during their periods of ascendency. As one of the old Wilmslow hands said afterwards, 'Coaches Chris Jones and Mark Jennings are clearly making progress on the training field, there was a growing accuracy and structure to the Wolves play and on this showing they deserve to be where they are.'

Next Friday, the Wolves face Midlands Premier League side Sandbach at the Memorial Ground for a floodlit kick off in the Cheshire Vase and the following week, they travel to Birkenhead Park for a difficult assignment against the league's second placed side.